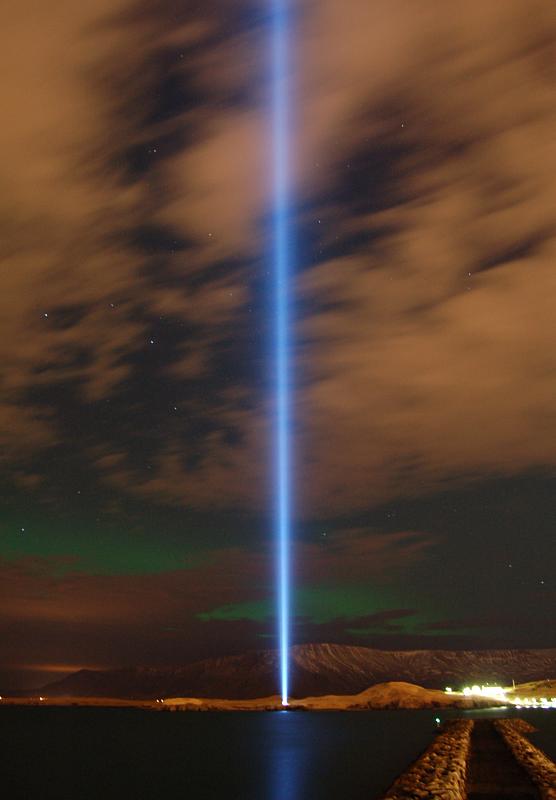 ON ENTERING THE AGE OF JOY

This last day of the year 2008
All of us can come together at www.IMAGINEPEACE.com
To enjoy spectacular images from the IMAGINE PEACE TOWER – LIVE – from Reykjavik, Iceland
– a special program made for this day.

On New Year’s Eve, The IMAGINE PEACE TOWER will be lit from:
Reykjavik: 5pm to 10am
New York : midday to 5am
Los Angeles: 9am to 2am

As we enter the New Year, we will be watching the IMAGINE PEACE TOWER and its warm light together.
Know that our light will be sending the light of love to all planets of the Universe as well.
On this day, I wish to express my love for all of us, including other beings on Earth.

AFFIRMATION FOR 2009 AND BEYOND

For the benefit of ours and other planets’
We make the right judgement, right decision, right move
at the right time and the right place
for ourselves and others.

We are now bathing in the light of Dawn
Standing in the Heaven we have created on Earth.
We now wish to share this Age of Joy
With all Lives in the Universe.

We are all one, united with infinite and eternal love.

For the highest good of all concerned, So be it.

IMAGINE PEACE TOWER is an outdoor work of art conceived by Yoko Ono in memory of John Lennon.
It is situated on Viðey Island in Reykjavík, Iceland.
The artwork was dedicated to John by Yoko at its unveiling on October 9th 2007, John Lennon’s 67th birthday.
IMAGINE PEACE TOWER symbolizes Lennon’s and Ono’s continuing campaign for world peace
which began in the sixties, was sealed by their marriage in 1968 and will continue forever.

The IMAGINE PEACE TOWER is lit on the following dates: