‘I dedicate this light tower to John Lennon.
My love for you is forever.’
Yoko Ono

‘Imagine all the people living life in peace’
John Lennon

On Friday 9th October 2009, Yoko Ono was in Iceland (in the real world) for the annual lighting of IMAGINE PEACE TOWER.

They say, if all the people in China were to jump up and down at the same time,
The axis of the globe would shift.

Well, we are here together. Billions of us.
Standing at the dawn of a new age determined to shift the axis of the world to health,
Peace and joy by loving and caring for all lives on Earth.

Some of us are here physically, some are joining us in spirit.
Some of us are imprisoned, tortured, maimed and silenced, but they are also here today with us.
Some of us have passed away before being able to enjoy a new age of love and peace.

But we are all here today standing together with hope.

The light is the light of wisdom, healing and empowerment.

Even in the moments of confusion, fear and the darkness of your souls,
Hold the light in your hearts,
And you will know that you are not alone,
That we are all together in seeing the light of peace.

I thank the people of Second Life, for giving so much love to this tower from its inception.
IMAGINE PEACE TOWER was visualized with love, and realized by love.
It is a gift from John and Yoko and the people of Second Life to the world.
I know that John is with us, too, in this land of Nutopia,
happy that the light tower is finally a reality after 40 years.

Let’s make a wish as the light goes on.
Let’s send light to each other and say I love you!

John, we love you!

Second Life is the internet’s largest user-created 3D virtual world community, designed and built by its inhabitants. It’s an online universe brimming with people and possibilities: a place to connect, shop, work, love, explore, and just be. You can find out more about it here.
Membership is free.

GET STARTED
Sign up to Second Life here.
Download the necessary software for your PC or Mac here.
That’s it! You’re ready to enter Second Life.
There’s an easy and very helpful guide to getting started here.
Once you have entered Second Life, from 9th Oct 2009, you will find IMAGINE PEACE TOWER Island here.

FAMILIARISATION
There’s more tips about how best to enjoy the IMAGINE PEACE TOWER ISLAND environment at the bottom of this page.

I am very pleased to be unveiling the IMAGINE PEACE TOWER in Second Life tonight.
I hope we will all come to visit it when it lights up every sunset time, as it spreads our wishes of PEACE throughout Second Life.

Remember, each one of us has the power to change the world.
Power works in mysterious ways.
You don’t have to do much.
Visualise the domino effect
And just start thinking PEACE.
The message will circulate faster than you think.

It’s Time For Action.
The Action is PEACE.
Spread the word.
Spread PEACE. 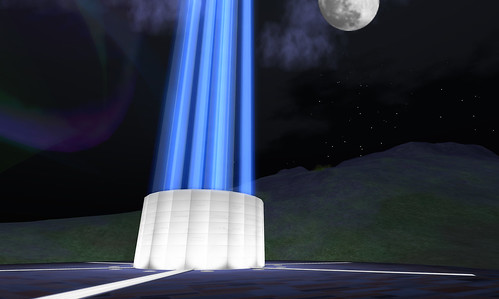 LIGHTING UP TIMES AFTER THE CEREMONY

After the opening ceremony, the Second Life IMAGINE PEACE TOWER will begin its cycle of illumination approximately 15 minutes after sunset on every Second Life day and will remain illuminated until dawn. The days are much shorter in Second Life than in the real world. Sunset happens in Second Life every day at the following times, both am and pm:

When you arrive at the island, you will first visit the VISITORS CENTER.

IN THE VISITORS CENTER:

WISH TREES
Outside the VISITORS CENTER and around the island you will find WISH TREES.
Make a WISH and your wish will also be sent to the real life IMAGINE PEACE TOWER in Iceland.

BOAT RIDES
Also outside the VISITORS CENTER are some boats in which you can travel around the island.

CONTROL PANEL
These are stationed around the island,  and teleport you to different vantage points on and above the island. It also enables various modes of dancing. Here’s the locations you can teleport to:

CLOUDS
There are 4 CLOUDS – at 125m, 225m, 300m and 500m. Inspired by the writings from Yoko’s GRAPEFRUIT and her album artwork for IMAGINE and LIVE PEACE IN TORONTO, these are platforms where you can take in the view, meet, talk and dance, while clouds magically form under your feet. You can fly or teleport between these platforms using the CONTROL PANEL, and from the top platform, you can take a parachute jump back down to the base and enjoy the view.

HOT SPRING SPA
Volcanic springs are common in Iceland. In fact, the real IMAGINE PEACE TOWER is entirely run on Geothermal Energy – from naturally occurring hot water. Here is a place to meditate, unwind and enjoy the view.

HOT AIR BALLOON
Inspired by John and Yoko’s film ‘Apotheosis” (which was all filmed from a hot air balloon) you can take a ride around the island on the IMAGINE PEACE balloon.

CONTROL PANEL
These are stationed around the island, and enable various modes of dancing as well as teleporting you to different vantage points on and above the island.

Boats at the VISITORS CENTER jetty.

IMAGINE ALL THE PEOPLE LIVING LIFE IN PEACE

Piercing the sky above one of Second Life’s most northerly sims, stands a tower of light that began life as an artistic concept in the mind of a young, wild-eyed artist over forty years ago. The tower, named IMAGINE PEACE TOWER, will be officially open on October 9, 2009 and will stand as a symbol for universal peace. It is part of a life-long dream of Yoko Ono, the artist who conceived the idea for the real world and who commissioned it’s creation in SL.

The tower will replicate, as closely as possible, its real world counterpart which opened on October 9th, 2007 on Viðey Island in Kollafjörður Bay near Reykjavík, Iceland. The terrestrial version is made of fifteen powerful searchlights manipulated with mirrors to form a column of light that is tall enough to not only reach cloud cover, but has been seen to penetrate well beyond it. According to the University of Iceland, the light is so powerful that, if within the column itself, the light would still be visible with the naked eye from space and could be easily detected with instruments from much further away from our planet. The base of the tower is an elegant but austere cylindrical structure made of white stone that is meant to symbolically represent a well, specifically a wishing well. Circling the well are engravings of the phrase “IMAGINE PEACE” written in 24 different world languages.

There are 15 spotlights in all. 9 shine straight up from inside the well and 6 are in the ‘corridors’ around the base and are reflected up by 6 mirrors.

IMAGINE PEACE TOWER’s wishing well concept is one that is a continuation of Yoko Ono’s interactive art. After the passing of her husband John Lennon, Ono began to collect wishes based on a traditional idea from her childhood. “As a child in Japan, I used to go to a temple and write out a wish on a piece of thin paper and tie it around the branch of a tree. Trees in temple courtyards were always filled with people’s wish knots, which looked like white flowers blossoming from afar.”

“All my works are a form of wishing” says Ono and indeed she has collected over 850,000 wishes since she started the project. In a 1996 interview, Yoko Ono explained: “I’ll tell you what’s going to happen: every piece of paper has a wish on it, I don’t read it, and all of them will be put in one big tower of a sculpture, like a totem. It will be a very powerful sculpture… a tower which contains wishes of the people of the world of our time. All in one tower!” What may have seemed like an abstract concept at the time is exactly what she did. The wishes Ono had collected over decades are buried under, and made a spiritual part of the IMAGINE PEACE TOWER.

The story of how IMAGINE PEACE TOWER has come to be in Second Life begins with SL developer Bernard Herzog, the elder of the father-son duo Herzog-Brenham. Inspired by the real world project, Herzog built a tower of light on the New Brighton sim that he owns. He took pictures and sent them to Yoko Ono’s IMAGINE PEACE website with the hopes of simply having them published to the site but they actually created a great deal of interest.

Ono would eventually see the pictures and it was agreed that if there was to be an IMAGINE PEACE TOWER in SL, it would need to be an accurate relative to its real world counterpart, and that Herzog-Brenham would be the ones to build it. Ono is known for forward thinking and was open to the idea of her concept crossing into virtual worlds. Bernard tells us, “It was not a hard sell and when I eventually met Yoko, she seemed genuinely excited and very open to the idea.”

Herzog-Brenham was introduced to Tetsuo Hamada and his son TetsuRo, who were responsible for the building of the real world IMAGINE PEACE TOWER and were supplied with blueprints, detailed documentation, and photos to work from. Herzog’s real life son and SL business partner, Dannyboy Brenham, has created scripting to handle the tower’s lighting sequence, which will happen at SL sunsets 6 times a day, as well as a special HUD to be used on the island and the handling of wishes sent in-world. Herzog says “I believe it’s as realistic as it can be”.

The HUD operates the free Onochord torches and preloads textures to improve the experience of the tower lighting up.

At the time of the writing of this article, construction was still underway and moving at a frantic pace to meet the October 9th opening date which also happens to be John Lennon’s birthday. The IMAGINE PEACE TOWER sim is restricted access until then but there’s no doubt there is a great deal of excitement surrounding it. Bernard Herzog tells us, “It’s a fantastic honor to be working on something that is so close to Yoko’s heart, albeit in a virtual world. I hope it captures a small part of the experience of visiting the real tower for many people who may not be able to travel to Iceland.” In many ways, it’s an honor to have the tower in our little world at all but it does seem fitting considering the global reach of Second Life.

or you can use the Cam Control HUD: View > Camera Controls

Mouseview
To switch to mouselook, press Escape, then press M.

TELEPORTER
Touch the buttons to TP.

Solo: Click the Dance button to dance. Click again and then on STOP to stop dancing.
Couple: Click the button and wait for danceballs to appear. Use the menu that appears to change dances.

JOIN IMAGINEPEACE.com GROUP
Search > Groups > IMAGINEPEACE.com > Join (free)
Wear the group tag to use the hot air balloon and the boats and to receive occasional news of events on the island.