I was inspired to do a variation of Yoko Ono’s Wish Tree Project with my Humanistic Traditions II class that I teach at the University of Central Florida in Orlando during a unit on 17th Century Japanese arts and culture.  Yoko’s message of peace and unity is too important to keep to one’s self, so I decided to spread the message to my students through a project that combines two traditional Japanese arts, Haiku and origami, with Yoko’s powerful exercise in collective consciousness and Sadako Sasaki’s 1,000 peace cranes.

For those unfamiliar with the story of the latter, Sadako Sasaki was a little girl who lived in Hiroshima, Japan and developed Leukemia as a result of the bombing in 1945.  Inspired by the Japanese legend that says s/he who folds 1,000 cranes will be granted a wish, Sadako set out to fold the cranes with a wish to recover from Leukemia.  Seeing that her condition was only worsening as time passed, she selflessly decided to wish for World Peace instead.  Although Sadako passed away at age 12, she lives on through her story, her hope, and her determination.   Because of her, today 1,000 origami cranes are often associated with World Peace.

As for my project, after introducing my class to the Tea ceremony, Kabuki Theater, brushstroke painting, Haiku, Origami, and Zen Buddhism, I told them about the 1,000 crane legend, Sadako’s story, and let them each choose a sheet of colored origami paper.  I told them about the wish tree and instructed them to write a wish in the form of a Haiku on the white side of the origami paper.  This way their wishes would stay safe inside the cranes forever, side by side with their classmates’ wishes, hopes, and aspirations.  They were then instructed on how to fold their origami cranes and it was great fun for everyone, including me.  It meant a lot to watch their eyes light up when they saw that their college instructor had an art project for them and that they would get to contribute a part of themselves to something meaningful.

The practical point of my project was to give my students a hands-on, collaborative experience in the Japanese arts.  I don’t think it’s enough for them to simply read or hear about art and to answer multiple-choice questions about it on an exam.  To really get a feel for it and appreciate what art is for, they should actually partake in it, which is why I had them use origami cranes instead of tags and to write their wishes in the form of a Haiku.  However, there is something more to it.  I think it is so fitting how closely related in spirit Yoko’s Wish Tree Project is to Sadako’s wish for World Peace and her determination to achieve that wish through the peaceful act of folding paper cranes.  In both cases we have two empowered females, both from Japan, spreading the message of peace and hope, and the power of wishing and collective prayer through art in action.  Starting with the foundation of age-old traditional Japanese arts, we see a progression of ideas through time and place and a connection of spirits among people who never even met each other from a little girl who retained the strength to hope through her suffering, to a very famous woman who has dedicated her life to spreading peace, to a Humanities class in Orlando, Florida.  As I interpret it, this is what Yoko’s Wish Tree Project is all about.  Every tag, or in this case crane, on wish trees throughout the world is a physical manifestation of the hopes and dreams of the collective spirit running through us all, regardless of time or place.

My students took such great care in “getting it right” while they were writing their Haiku wishes, folding their cranes, and finally attaching them to the wish tree.  I told them that this project is not about perfection, but inspiration, and they seemed to pick up on the idea of the collaborative spirit going into the creation, which was evident in the way they communicated with and helped each other.   Some students weren’t as good at folding the cranes, and the ones who were better at it willingly went around offering their help, all in the spirit of making sure that everyone would get to contribute their peace crane to the wish tree.  That day, I saw the concepts of peace, kindness, and collective consciousness turn into action as my students witnessed firsthand the importance of adding their part, no matter how small, to a unified whole.

The physical result of the project is a small, colorful, Christmas tree-shaped Wish Tree with graceful cranes flying every which way.  I see the cranes as symbols for us; we are all made of the same basic materials with the same basic symmetry and the same basic shape, but the small variations and twists on the essential formulas make us individuals.  We come in all different sizes, colors, and backgrounds, each with something unique to contribute to the Whole.  Each crane adds something special to the tree and the outcome wouldn’t be the same if it had one less.  Likewise, we are all here together on this earth and in this universe and we each have the opportunity to contribute something beautiful.  Every thought, word, and action makes a difference no matter how small, so as I tell my students, make yours count!

The project was a great success and I received much encouraging feedback from my students.  I plan to continue doing Peace Crane Wish Trees with my future classes to keep the message spreading.  Thank you, Yoko, for the inspiration for this project and for your continued work and determination to achieve peace in this world.

Hi, Jackie!
Thank you for letting me know about your project.
What a great idea to entrust the spreading of the message to the peace cranes.
It is a strong prayer for World Peace.
I thank you on behalf of all peace lovers of the world.

I thought you might enjoy this.
I wrote it in the liner notes for my album RISING. 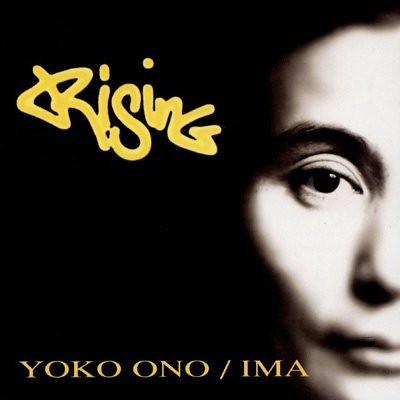 WHEN MOLECULES RISE, THEY CONVERGE.
by Yoko Ono

A playwright. Ron Destro, came to me in 1994 and asked me to write a few songs for his play, “Hiroshima.” He reminded me that 1995 was the 50th anniversary of the Hiroshima tragedy. In his script there is a scene where a little girl tries to fold 1000 paper cranes. In Japan there is a tradition of folding 1000 paper cranes to make a wish. The little girl dies before she is able to fold all 1000 cranes. I was particularly touched by that scene, and went into the studio. I first recorded “Hiroshima Sky Is Always Blue,” and realized that it was too long to be in a play. “Never mind,” I thought. “I should just keep recording when I’m inspired.” ”I’m Dying” was the second piece I recorded. “Kurushi” was the third. Kurushi, in Japanese, means something like “tormented,” “pained” and “suffocating.” In fact, it’s a very Japanese word, and there is no exact translation in English. When I was recording “Kurushi,” I felt that the little girl was me. Then at one point I heard myself saying “Mommy. Mommy, I’m in pain.” I couldn’t believe it. I’m still calling for my mother? Where did that come from? Then I remembered my son, Sean, crying “Mommy” in the middle of the night when he was in pain. Probably that’s what we all do. But I haven’t called out to my mother for the longest time. In my mind’s eye, I saw a large projection of my mother’s face on a backdrop, while I, as a little girl, kept folding the paper crane. Mother was a projection. That’s why I gave up calling out to her. I thought. In the dark booth of the studio, I felt my soul-antenna reaching for her and touching only emptiness. It was sad, but it also made my head clear. I felt alright.

Then songs flooded into my head, and I kept writing and recording. The memory of being a young child in Japan during the second World War came back to me. I remember being called an American spy by other kids for not singing the Japanese National Anthem fast enough (it’s a slow song, but they suspected that I didn’t know the Anthem too well since I lived in the United States before the war). I remember the severe bombing in Tokyo, hiding in an air-raid shelter listening to the sound of the bombs coming closer and then going away, and feeling that my mother and I lived another day. I remember when something that seemed like a piece of a B-52’s fuselage fell in our garden with the words “piss on you” scribbled on it. I remember how Count T., my uncle and a Princeton graduate, laughingly said to my mother that he would not translate such a word in the presence of a lady. I remember sneaking into my father’s library and looking in the dictionary to find the word “piss,” without success. I remember being evacuated to the country; the food shortage, and starving; going to the next village to find rice for my brother and sister; being stoned by the village kids who hated people from the city; getting anaemic and being diagnosed as having pleurisy; being abused by a doctor, and having my appendix taken out without proper anaesthetics because of the shortage of medicine. I remember how I cried at the end of the war, how bombed out Tokyo looked when I returned from the country on the back of a truck, and what we went through daily reading about the people in Hiroshima. The ones who died of burns went quickly. The ones who died of leukaemia went through a slow and agonizing death. We lived through their death.

Then I realized that there was a striking similarity in what I went through then and what I am going through now. The city is a warzone. And I now have many friends around me who are facing slow death from AIDS. They are suffering low white blood cell counts exactly as the Hiroshima victims were. I am living amongst my suffering friends, listening to them talk about their fear of death, sometimes jokingly, and other times in anger. I live through their nightmares, not daring to voice my own.

The making of the album served as a purging of my anger, pain and fear.
I hope it will for you, too.