Volunteer work on Viðey in September 2009

Participating in an international short term volunteer project ( so called Workcamp ) can be an exciting prospect. It is an interesting and meaningful way to travel with purpose and spend 2-3 weeks in a foreign environment. Working and living together with other young people from around the world provides an excellent opportunity to make many new friends, learn about unknown places and culture, gain new skills and experience. Your time, energy, and enthusiasm can make a difference in areas where help is really needed. 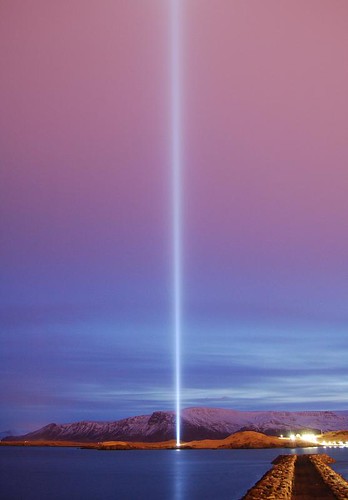 Volunteer project:
Volunteers will be living and working on the island of Viðey by Reykjavík. The group will mainly work on the preparations for the lighting of the Imagine Peace tower on the island, which is an outdoor work of art conceived by Yoko Ono in memory of John Lennon. Diverse tasks will be done as coastline cleaning, maintenance and marking of hiking paths or bicycle trails, putting up of signs in noteworthy places, as well as works on common and green recreational areas, gardening and painting works, etc.

The artwork was dedicated to John by Yoko at its unveiling on Oct. 9, 2007, Lennon’s 67th birthday. It symbolizes Lennon’s and Ono’s continuing campaign for World Peace, which began in the 1960s. The tower is composed of a tall shimmering tower of light that will appear every year and be visible from Oct. 9 (John’s birthday) until December 8 (the anniversary of his death). In addition, it will illuminate from Winter Solstice (Dec. 21st – 28th), on New Year’s Eve (Dec. 31st) and the first week of spring (March 21st -28th). It is lit from 2 hours after sunset until midnight, and until dawn on New Year’s Day.

Leisure time: Whale watching, puffin boat excursions and free time activities in the area will be organised free of charge for the volunteers. Volunteers will also have free rides in the boat/ferry to the city of Reykjavík during their free time.

Accommodation: Volunteers will be lodged in a local house, sleeping on mattresses. A warm sleeping bag is suggested.

Location: Viðey or “Wood Island” is the largest island of the Kollafjord Bay (1,7 km²) with its highest point rising 32 m above sea level. It is divided by a short isthmus and the western part is called The West Island (Vesturey). The large part, with the church and Viðeyjarstofa (Viðey House), is called The Home Island (Heimaey) and the south-eastern part is called The East Island (Austurey). The island is of volcanic origins and was formed about 2 million years ago; several spots on the island depict beautiful basaltic columns, while it is well vegetated and boggy in places. About 156 species of higher plants have been found on the island and the avifauna is highly interesting. At least 30 species of breeding birds have been counted, the most common ones are eiders and the lesser black backed gull. Archaeological excavations have disclosed the fact, that the island was inhabited already in the 10th century. In the 12th century a church was built on the island and in 1225 an Augustine monastery was established there, which was a centre for pilgrimage in the Middle Ages until it was abolished in 1539 after the reformation had started in Iceland.

The Viðeyjarstofa house was built in 1755 and is thus the first construction made of stone and cement in the country. The church was consecrated in 1774 and is the second oldest one still standing. The island became the seat of the first Icelandic treasurer and later the first Icelandic sub-governor, Mr Skuli Magnusson. In the beginning of the 20th century the country’s first harbour for ocean going vessels was built on the eastern part of the island and a hamlet developed there. The last inhabitant left it in 1943, when the harbour of Reykjavik had taken over.

There are hiking and cycling paths around the island and there is no motor traffic allowed. It also inhabits intriguing sculptural art work, amongst them all nine pairs of basalt pillars that comprise Richard’s Serra’s work Áfangar and Yoko Ono’s peace column. The island has been subject of interest lately, regarding the potential moving of open air folk-museum Arbaejarsafn to the island.

Other places of interest on Viðey are related to archaeological research, the village. At the eastern end of the island is the site of the abandoned fishing village and Viðeyjarnaust, at the southwest of the island, it is a memorial to the twenty men who lost their lives when the cutter Ingvar sank off Viðey in 1906. Dramatic formations of columnar basalt may be seen on the shore.

The extra fee is intended to support the local host of the project and is payable upon arrival.