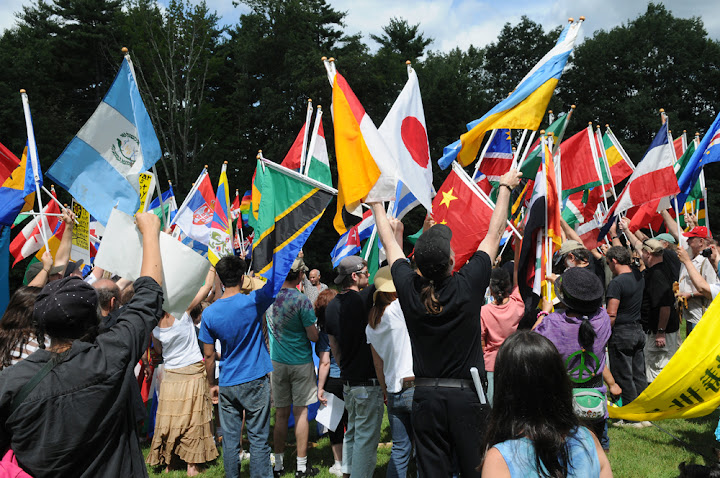 This year marks the 40th anniversary of the Woodstock Festival, and many events are being held throughout the area to honor this singular occassion. The first of these, the Woodstock International Walk for World Peace, will be held in Woodstock, NY on Saturday and Sunday, August 8 & 9, 2009. The UN-affiliated World Peace Prayer Society is contributing the flags of all nations for the walk, which culminates in Comeau Field, a 45-acre property with spectacular mountain views that the town has generously provided. There will also be Native American participation throughout the event. The Town of Woodstock, in concert with the Woodstock Chamber of Commerce and Arts (and with other organizations) is sponsoring the walk, which will be led by children carrying smaller flags. Father John Nelson, who was notably featured in the documentary movie American Heart, is the founder of Woodstock International Walk for World Peace. He has inspired the entire community through his tireless advocacy for a non-partisan, pro-peace movement; and has formed a large and growing network of peace ambassadors by working closely with fellow pro-peace activists Benta Vos and Cameron Williams.

“We are walking for peace, and are not protesting”, said Father Nelson. “We support all efforts to end hunger and disease, promote disarmament, provide clean water, further education, health care, and housing; these are the tools for establishing a more peaceful world.”

The walk begins on Saturday, August 8 at 8:00 a.m., with participants gathering at the intersection of Routes 375 and 212. At 9:40 the walk will commence with the spectacular parade of flags through the town, past the village green, and continuing along Route 212 to Comeau Drive, then on to Comeau Field, where the World Peace Prayer Ceremony will be held, followed by several guest speakers and other entertainments.

Acclaimed artist and Woodstock resident Ronnye Jai has organized a peace weekend “Paint Out”, also at Comeau Field, with other notable Woodstock artists contributing their work.

The peace weekend events continue on Sunday, August 9; at 7:00 a.m., a non-denominational Sunrise Peace Vigil is being held at Opus40, a National Historic Site in Saugerties, NY, and people will gather at Father Nelson’s church, The Church of the Holy Transfiguration of Christ on the Mount, also featured in the National Register of Historic Places, for music, prayer and celebration throughout the day.

• Drums for World Peace, led by Kodi Drummer, will be held at the Wok ’N’ Roll Café, 50 Mill Hill Road
There are many other events taking place in Woodstock on August 8th & 9th.

For two reasons. First, as you may or may not be aware, this week marks the 64th anniversary of the bombings of Hiroshima (August 6th, 1945) and Nagasaki (August 9, 1945). We feel that a walk and celebration for peace on this anniversary will be a fitting memorial to the victims of those bombings, and a reminder to us all that we never again want to witness the horror of nuclear devastation.

The second reason is that while we also wish to honor the spirit of peace and love that “Woodstock” brings to mind, there are many events being held in the area on the following weekend, the actual anniversary of the Woodstock Music & Art Fair, and we do not wish to steal thunder from these events, nor undermine the effort that has been made to produce them; after all, many of these events are being produced by our friends and neighbors.

Why do you insist on neutrality?

Because we are only for peace, we don’t believe in the aggressor-victim model; that sort of thinking results in never-ending spirals of war. It is always easy to place blame; taking responsibility is much harder, but we believe in taking responsibility for peace. We could write paragraph after paragraph trying to explain our position, but it has been stated more eloquently than any attempt we might make by the prince in Shakespeare’s Romeo and Juliet, act 5, scene 3:

These three simple words contain the entire moral of the play; for all are punished; the Montagues and Capulets have lost a son and daughter, and the Prince has lost his kinsmen Paris, Mercutio and Tybalt, and we may rightly infer that all are punished because all are equally culpable.

When conflicts are viewed in this light, it no longer makes sense to take sides; it becomes clear that advocating for one side over another in any conflict can only result in more violence and bloodshed. The only way to peace is through peace; this powerful approach cannot be resisted. If we all demand peace from our leaders, we will have peace; as John and Yoko put it:

How we will make a difference:

By building awareness of the futility of conflict and war by holding walks for peace, distributing literature at these and other events, and by maintaining a web presence, in order to build a large grassroots organization

By stressing our commonality and the universal desire for peace and well-being
By supporting those organizations whose efforts are most effective in promoting and providing education, clean water, housing, sustainable agriculture, medical care, and economic development
Through letter-writing campaigns to the leaders of all countries that emphasize the universal desire for peace

A weekend of information, discussion, arts and strategy for a peace economy.