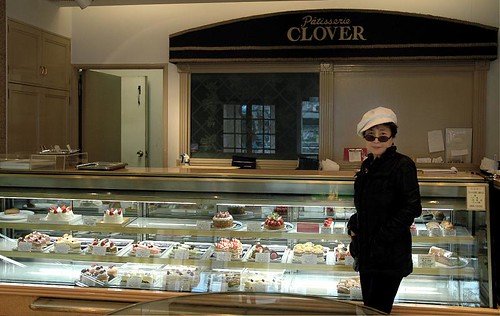 This is a patisserie which existed from the time John and I were in
Tokyo. We use to walk to it from the hotel we stayed in. It was quite a
walk, but we liked that. We were getting some exercise as well that way.
It had a nice after the war elegance, spiral staircase to go upstairs,
blue velvet sofas and guys with high collar shirts underneath
cheap-looking black jackets and pencil thin trousers and such. John and
I loved their crème de marrons and great coffee. In those days, Tokyo was
full of coffee houses. More than now. But this was John’s favorite.

This time, I saw it from the limo window, and was surprised that it was
still there!

So I saved it for the next day, and walked to it from the hotel, just
like I did with John, a long, long time ago. The spiral staircase had a
new coat of paint on… probably many times over from when we frequented
the place. The upstairs did not have blue velvet sofas anymore. Instead,
there were round tables, and chairs with blue seats. The carpet was
still blue, too. It seems the blue velvet was/is their motif.

By the way, it was long before the film “Blue Velvet.” I wouldn’t be
surprised if David Lynch came here and took his film title after this
coffee house – I’m sure that is not the case – but in those days it was
the kind of coffee house that you wouldn’t be surprised to see somebody
like him sitting there.