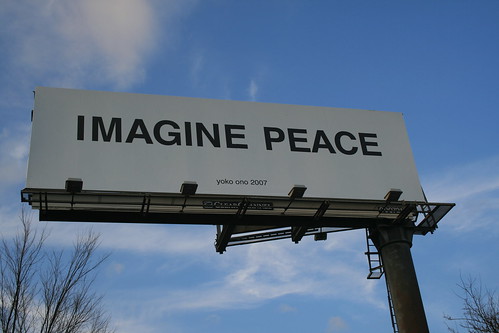 Out of the blue and without any announcement, Yoko Ono’s “IMAGINE PEACE”
billboard appeared in the city of Canton, Ohio, around the beginning of
December 2008.

I heard this news from Dr. Kevin Concannon who is the curator of Yoko
Ono’s recent show, “Yoko Ono: IMAGINE PEACE Featuring John & Yoko’s Year
of Peace” from October 27th to December 8th, ’08 at New Jersey City
University in Jersey City, New Jersey.  Dr. Concannon told me about the
sudden appearance of the billboard in Canton when I met him on December
8th, ’08, for his lecture related to the above-mentioned exhibition.

The exhibition, “IMAGINE PEACE Featuring John & Yoko’s Year of Peace”,
has been traveling around the country since 2007, starting in Akron, Ohio,
then on to San Antonio, Texas, Lewisburg, Pennsylvania, and Jersey City,
New Jersey.

When the show first premiered at the Myers School of Art of the
University of Akron, from July to September 2007, Yoko Ono’s “IMAGINE
PEACE” billboards were placed in Akron and Youngstown for the duration
of the show.

My assumption is that exactly the same billboard banner was recycled and
is being used for the current display in Canton, which is not far from Akron.

Currently, there is no art show or anything like that by Yoko going on
in Ohio.  Therefore, the presentation of this billboard in Canton is
a spontaneous one.  I believe that someone in the advertisement company
for the billboard must have been inspired when it was shown in Akron in
’07 and decided to show it one more time, this time in Canton.

I am so touched and delighted to know that someone paid out of his own
pocket for this billboard to spread the message of peace.

It is as if a seed of a plant flew away with the wind, landed on a
different place and started blossoming in the new location.

Every day I am surprised by seeing the tragic news from around
the world.  It seems that we are doomed to catastrophe.  What
I believe is that peace is probably not yet a permeated concept to
millions of people.  Somehow they might be afraid of the concept of
peace.  In order to achieve peace, however, we have to kill our own
demons inside, not outside.

For me, “IMAGINE PEACE” is like a mantra or affirmation which Yoko gave
us to subside the demons inside of us and channel them into something
positive.  If we only focus on the tragedies of the world, we will most
likely end up being swallowed up by them.  Although it is very important
to stop the violence in the world as much as we can, let’s focus more on
peace.  I believe that the peace I imagine does not necessarily end with
me and my visualization for peace will spread out to the world.

Yoko’s “IMAGINE PEACE” billboard, which appeared suddenly in Canton, is
the affirmation of my belief.

You can see my photos of the “IMAGINE PEACE” billboard in Canton,
Ohio, December 2008 in my Flickr account in the slide show and at the URLs below:

Dear Mikihiko, Thank you for the information. The photo of the billboard against the blue sky is looking so good, I feel like I am there. Lots of love, yoko