kī-ˈmir-ə, kə- [ki-meer-uh, kahy- meer-uh]
noun
1: fire-breathing she-monster in Greek mythology having a lion’s head, a goat’s body, and a serpent’s tail
2: an imaginary monster compounded of incongruous parts
3: an illusion or fabrication of the mind ; especially : an unrealizable dream

IF BY YES – Sublime sounds from Yuka Honda, the brain of Cibo Matto, and the extraordinary vocalist Petra Haden, with Yuko “Migu” Araki & Hirotaka “Shimmy” Shimizu from the Cornelius band. 3 songs are included on the sampler including a remix by Cornelius.

Sean Lennon – Preview of several terrific new songs, plus two instrumental selections from the soundtrack to a low-budget horror movie, Rosencrantz & Guildenstern Are Undead, composed and recorded on his bedroom laptop. Dramatic & wild – the film score sounds like the son of Ennio Morricone ca. early 70s.

Kemp And Eden – Charlotte Muhl’s GOASTT work made us rather curious to hear her unrecorded Atlanta teen folk duo, and at our urging the idiosyncratic songwriters have reunited for a tremendous 2009 debut album.

YOKO ONO – PLASTIC ONO BAND – The visionary music of this iconic avant-garde pioneer was a precursor and inspiration to both Punk Rock and Krautrock, as well as numerous contemporary greats. Mom now returns to Plastic Ono Band in the prime of her life, ready to kick more ass.

Look for albums by these artists and other surprises in the year to come.
Released on 21 January 2009

If By Yes: You Feel Right (Cornelius remix) 試聴

The GOASTT: World Was Made For Men 試聴

If By Yes: ‘When I Touch You, It Feels Right’

MARK RONSON: We have a group called Kemp and Eden. And here’s Kemp. Say hello to the people.
SEAN LENNON: She is feeling a little queasy.
CHARLOTTE KEMP MUHL: I was just drinking some of that tea that Moby puts out.
SEAN LENNON: OMG, you drank Moby tea? We might have to take you to the hospital!
SEAN LENNON: This is our band, The GOASTT and it is produced by Mark Ronson. This is unmixed.

MARK RONSON: Nice drum fill Sean. Do you like the bass? I play the bass right here! So, exclusive sneak preview of Ghost of a Saber Tooth Tiger. That is not even a mix. That is nothing. Let’s just play two more before we get out of here. Say something.
SEAN LENNON: This is a song called ‘Rainbows in Gasoline’. It’s another song by The GOASTT and it was written by Kemp and I, also known as Charlotte, my girlfriend.
MARK RONSON: What does this group say to you?
SEAN LENNON: Basically there’s like a lot of retro bands around, like retro 60’s and retro 70’s. We are like retro Paleolithic Era, because we want to take it all the way back. We are really into lizards and that kind of shit. We are taking retro back to its logical conclusion. It’s like Pre-Man.
MARK RONSON: This is track four right?
SEAN LENNON: Right.

The GOASTT: ‘Rainbows in Gasoline’

MARK RONSON: So here we go. This has been the Chimera records sneak preview exclusive block of records by If By Yes, also Ghost of the Saber Tooth Tiger and also we’ve got Plastic Ono Band. A very special sneak preview. You played me this song the other night, but is it your mom, Yoko, produced it or what’s the deal?
SEAN LENNON: Yeah, well we produced it together and we are reuniting Plastic Ono Band, her band from the mid 70’s and it’s kind of exciting.
MARK RONSON: Who’s playing on it?
SEAN LENNON: I’m playing drums. It’s live. It’s just like old school. We did it all live in the studio with my mom in the room with us. There is a guy named Shazadim on bass, a multi-talented kind of weirdo guy that we love and I’m excited by the record. It’s all coming out next year, The Ghost of a Saber Tooth Tiger, If By Yes and the Plastic Ono Band.

Well I failed to post that we were debuting Chimera Music in Tokyo 21 January, for which I’m sorry, but there was just too much to deal with leading up to the gig. The show was packed anyway, and turned out to be a huge success. Phew!

The artists playing were Kemp and Eden (Charlotte’s band since childhood), the GOASTT (my new band with Charlotte), If By Yes (Yuka Honda’s band with Petra Haden, and Shimmy and Yuko, bassist and drummer from Cornelius band, and generally the cutest husband and wife I’ve ever seen), Myself doing solo tunes, and my mom’s Plastic Ono Band Revisited or Revised or what have you.

To top it all off our backing band was Cornelius! For those of you who don’t know, you should all go listen to their most recent album Sensuous Sounds. But for those of you who do, I’m sure the shock and awe are just setting in. Cornelius was just made the 2nd Japanese artist in history to be nominated for a Grammy in America, for which I’m very proud. I’m such a big fan of this band, the fact that they’d want to be our backing band is such an incredible honor. They really played their asses off, and learned 20 songs in 5 days in order for us to mimize the amount of time we’d be in Japan (the country is not cheap)

The way the show worked was more like a variety gig, or how I imagine early Motown gigs might have been, meaning there was one band, with different artists and bands trading off from song to song.

Based on the audience reaction, and the enthusiasm over merchandise, I’d say the show was a huge success, for which I am thrilled. Starting a label has been so exciting but also nerve wrecking at times. Having a successful debut in Tokyo has revitalized my belief that what we are doing is the right thing.

To coincide with the show we put out a sample CD of Chimera Artist which is available on Japanese iTunes and Japanese Amazon. We’re working on importing it to America, and doing an American Sample album in the near future. To all our American fans we apologize for starting over seas, but the stars were just aligned here in Japan, so we had to go where the flow was. We’re just getting our feat on the ground as a company, so doing an introduction in Japan really helped, and was such a pleasure as well.

A children’s book I illustrated has also been released by Kodanshya in Japan. For those of you who have mentioned to me that you’re hesitating to get it because of the language factor, don’t worry, the book is printed in English AND Japanese on every page, so it’s in fact good for kids to get a leg in that door. The drawings are all based on my niece and nephew, whom I love dearly, and few are based on my great great great grandfather, who was in fact a samurai. (There was a statue of him at one of my ancestors houses that I used as a reference.)

Unfortunately we sold out on all the practical sizes of teeshirts. There are only a few odd sized ones left. I’m thinking of throwing them in my suit case and bringing them back to NY to make available somehow.

Charlotte and I customized a bunch of vintage coats by drawing all over them and sewing on official Chimer badges. Those just flew off the merch table, so we’re thinking of trying to make twice as many next time, although we’ll need a lot of time to do it.

We’ll be back stateside early Feb recording a new Yoko album. That’s gonna be really fun. Then off to Paris 25 Feb to play Serge tribute with John Zorn. Singing in French is so difficult. Somehow I always forget the words.

Anyway, much love to everyone. hope to see you at the American Chimera debut show, although it hasn’t been booked, I’ll let you know as soon as it has. 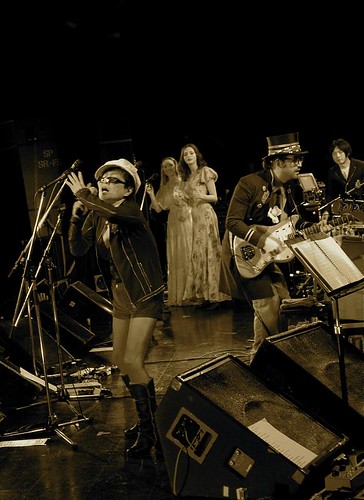 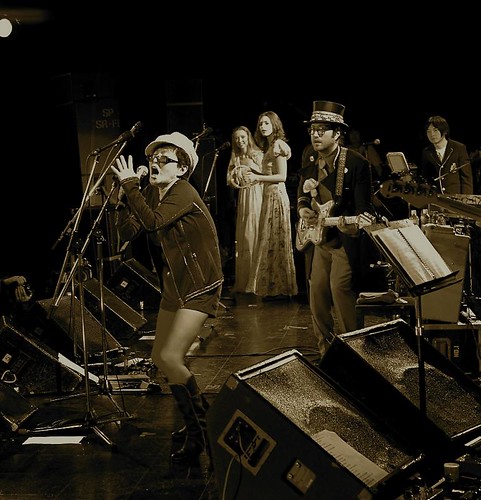 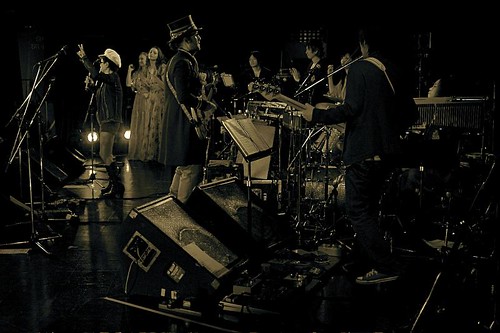 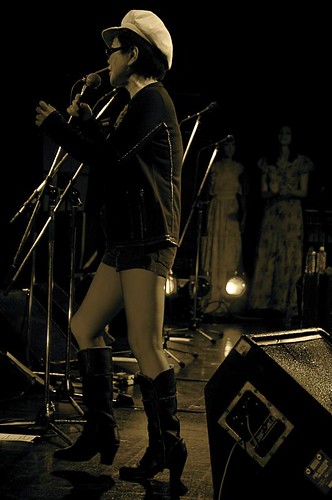 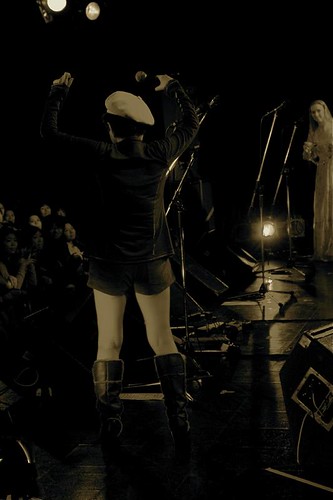