Audio from the evening’s performance:

Well I am certainly suffering for my art tonight as I have just spent my money on going to London to see other great artists work and there is no money in the gas meter so the big freeze is a happening right in my own home tonight, while I write up my blog about the big Frieze. 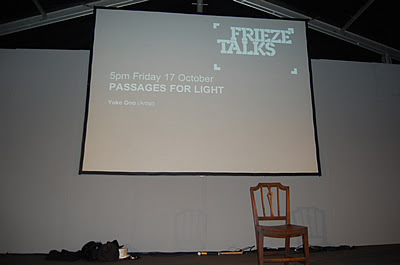 What an organization I had to get a train to London the night before the Big Frieze so I could get to the Frieze early to book a ticket to see Yoko in action. Only to be told by several security on the door that all we had to do was turn up 30 minutes before the talk started. So my friend Claire and I wandered around Regents park looking at the art that was on general public display.

When we got in we walked and walked all around till 3.30 then pondered across the auditorium where the talks were held and asked about Yoko’s talk, they replied it had sold out. Still with hours to go, we were raging. They said they would hold any tickets that came back. We wandered some more and went back. With luck on side this time there were two tickets held.

We were so exhausted we hung around till the talk began standing in a zigzag que. 5pm we were in and I ran to the front and there seats with names of Princesses and reporters and art critics on and two empty seats. I grabbed mine and put a bag on the other for Claire. There we were front row right in the middle, with big cheesy grins on our faces.

On stage is a projector and a pile of hats a blank canvas and two hammers and a chair. Yoko Ono comes on to stage and looks no different from my image I had as a child of her in the imagine video. She puts on a hat and tells us of her child hood wearing hats and how her mother said she looked good in hats. This hat gives me memory’s of her in the 2nd world war her as a child begging for food with her family after her city has been bombed. Wars don’t leave you in one piece they take away something or everything. My mother was also bombed out in London as a child and has been deaf from the sound of bombs and has many other dysfunctions of war. 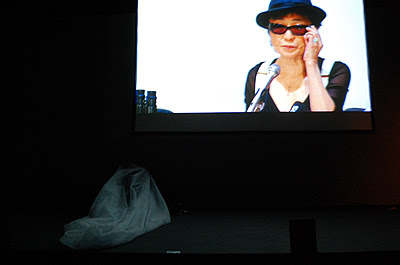 Yoko puts a white veil on that reminds me of a wedding veil or spirit and moves around on stage under the veil while her film is showing. Her film is about peace and her love for John.

John’s birthday was on the 9th of October and Yoko celebrated by building a giant light that beams love in the SOS signal to the whole Universe. The light sculpture was thought up decades ago and has only just come into real life. 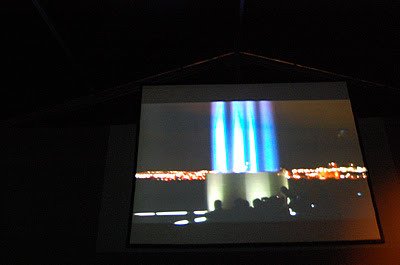 This an image of the light in action on the Johns birthday. Iceland has an 80 percent electricity energy from water, so its the best place for the light to go and Yoko says the north of the planet is more intelligent then the south and the light will spread the intelligence to the south of the planet. I like the way Yoko has taken a spiritual creative approach to creating peace on the planet. Yoko and John had a more media approach for the Vietnam war which they had a international poster campaign, saying the war was over. Which he did end, but not for long new ones have cropped up. We need to end them for good as in forever and stop letting the maniacs rule the planet. 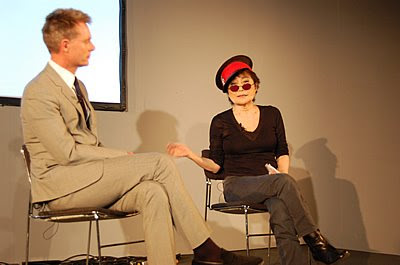 An art critic gets up and stage and helps with he questions and answers. She had good answers for all the questions. One of the questions was from a Mexican female artist who was concerned about female artists in Mexico getting a hard time. Yoko’s answer was write what you want in life down and put it in a draw and the brain heals abuse. But also Yoko has a wishing tree in Iceland and all our wishes can be sent there. She gave everyone in the audience a stamp and a parcel tag to write our wish on and our own miniature light to use to do the S.O.S I love you on everyone we meet. 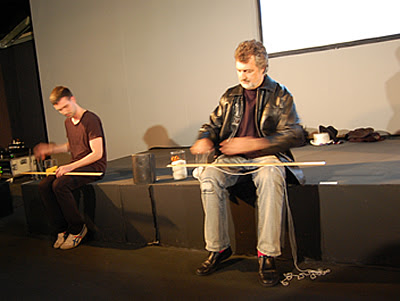 During Yoko’s question time these two lads were performing with wool, measuring it and putting it in a glass jar at different speeds. This I like because I am working with wool at the moment, knitting my artworks. Wool is organic, biodegradable resource and fleece’s from sheep are not used enough. 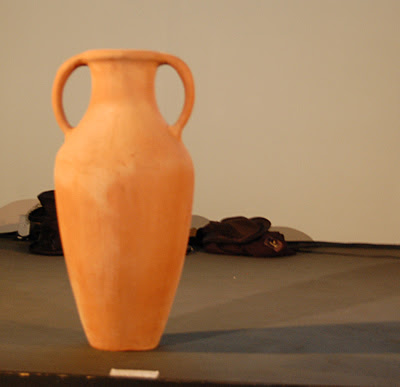 Yoko’s last piece was a big clay vase on the stage. 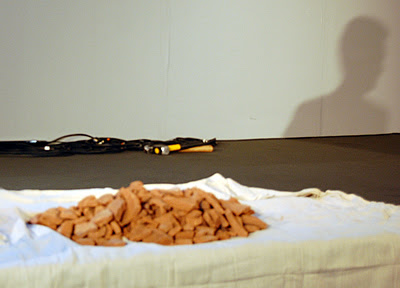 This is what we were suppose to imagine happened to the vase. We were told to all take a piece and put it back together later on in time. 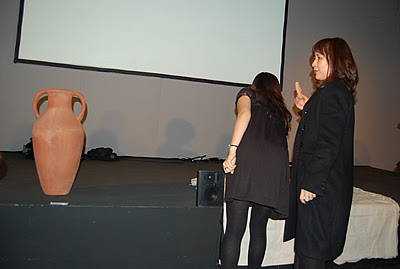 The start of the frenzy for her broken vase. 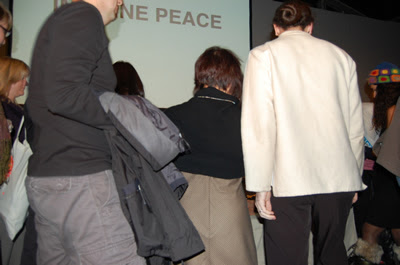 This where they go crazy, I sneak in between there legs and head butt someones nuts on the way out. 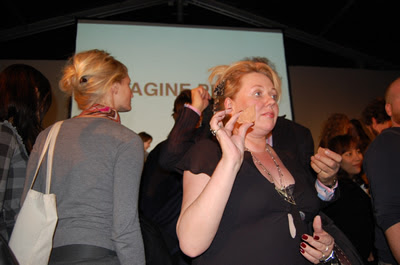 Meanwhile Yoko has sneaked out the back door. So I missed out on having my photo with her. People were bagging them up, when it was a piece each. This lady is posing hoping a camera will catch her with her piece. It all reminded me of an old trick that Jesus might have done to keep away his fans. Have this rock I have touched. Although a pottery vase is a nice touch, organic clay, no harm to anyone, not a stolen rock from Wales or mined gold. A piece of fired earth to help us remember peace.

Artist Yoko Ono will present a keynote lecture, demonstrating the continued importance of the performative practices and engagement with audiences that she has pursued since the 1960s.

Frieze Talks is a daily programme of keynote lectures, panel debates and discussions taking place in the Auditorium at Frieze Art Fair.

Access to Frieze Talks is included in the Frieze Art Fair admission ticket. Book admission tickets here.
Seats for talks can be individually booked from 11am on the day outside the Auditorium within the fair. Ticket-holders are requested to arrive at the auditorium 15 minutes before the talk starts in order to guarantee a place.

Boris Groys, Carsten Höller, Yoko Ono and Cosey Fanni Tutti are all part of the international line-up of artists, philosophers, writers and cultural commentators making up Frieze Talks 2008.Frieze Talks is presented by Frieze Foundation in collaboration with Frieze magazine.

Jennifer Higgie, Co-Editor of Frieze magazine said, “We are excited about the richly diverse, international programme of speakers we have put together for the 2008 Frieze Talks. From artists and novelists to philosophers, architects, musicians, critics and curators, this year’s participants will be discussing, illustrating, performing and arguing some of the myriad issues swirling around the world of art and visual culture today.”