A DAY IN THE LIFE by John Lennon 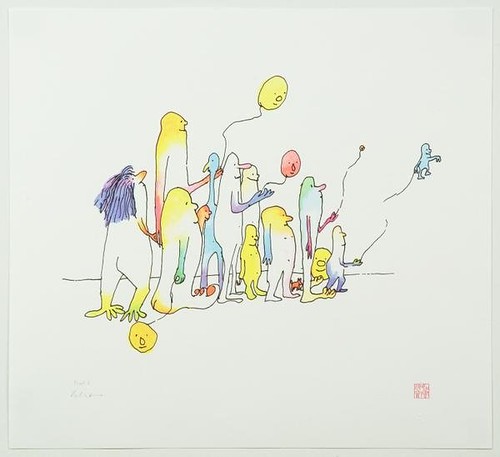 Yoko Ono on Lennon’s art: ‘He would not have minded’
By Bill DeYoung
Thursday, February 28, 2008

As the keeper of John Lennon’s flame, Yoko Ono is the motivator behind “A Day in the Life,” a touring exhibition of her late husband’s artwork.

Lennon was a compulsive doodler, filling one sketchbook after another with quirky, whimsical drawings. After his death in 1980, Ono started pulling them out of drawers and file cabinets; “A Day in the Life” includes more than 100 pieces spanning the years 1968 to ’80.

They aren’t original works, but limited edition copies, many of which have had color added. In this interview, Ono, who just turned 75, explains how and why she overcame the thought of “sacrilege.”

First of all, happy birthday. We saw you at the Grammys — you look great. How do you do it?

Thank you. I don’t know! Just living — living in a sense that I’m thankful of every moment. Because some people don’t last that long, and so every day’s like a bonus. And I’m feeling good.

Every time this show comes around, I get a call from an angry guy who says, “You know this isn’t original Lennon art!” So for the record, what is it?

These are serigraphs and lithographs. Some of the lithographs were done when he was alive — that’s “Bag One” — and the other lithographs were done after he passed away. Serigraph means I will pick one very good, or what I think is good, drawing of his and make sure it’s done right. Usually, it’s 150 or 200 copies, and then I sign them.

John did not use colors, but many of these prints are in color.

That was rather controversial in a sense. People said “Why would you do that?”

This is exactly how it happened. I hired some professional people who set up these art tours; they came in with a brightly colored piece of work based on John’s drawings.

I said, “You can’t do that; it’s sacrilegious,” and they said that if they didn’t do it, they couldn’t put it in the shop window, the gallery window. They’ll just put it in the back; we need something in the window up front to show that there’s a show of John’s.

When I was an artist, I thought those things should not be done. But I was baptized by my association with rock ‘n’ roll and John, and I realized that in the record world it’s very important to have a record cover that’s good. John and I always used to do something very artistic on record covers.

So I said, “Well, would you mind if I colored them?” Because I was his partner.

He would not have minded.

I colored them, but I did it in such a way that it would not disturb his work, so to speak. Hopefully. In a very kind of delicate, light way.

Obviously you have an emotional and financial interest in the Cirque du Soleil show, “The Beatles Love.” But what did you really think of it?

There are two parts of the show, and of course the Beatles’ music is brilliant. And (music producers) Giles and George Martin really did a fantastic job to make it sound current, in a way. We’re all proud of their part of it.

And of course, Cirque du Soleil, what they did is beautiful too. But it’s their take on it. I think the symbolism worked very well. The point is, we’re giving the spirit of the art, and they’re giving the body. Between the spirit and the body, I think there’s an incredible strength and power. It was very interesting to know that the music itself had that versatility, to allow other people to stretch their minds on it.

What about Julie Taymor’s “Across the Universe” movie, which was built around Beatles songs?

I think the actors and actresses did fantastic interpretations of the songs. Sometimes I did not agree with Julie Taymor’s take about the songs. As for the story, I thought that the real story was much more powerful. I’m sorry, but …

Last year, Olivia Harrison mentioned that the Beatles catalog was being remastered for CD and the packages would be expanded with good artwork, more photos, et cetera. What can you tell me about that?

That’s a very leading question, and you’re such a politician about it. I have the choice to say she’s right, or she’s not right, is that what it is?

We are, naturally, making it good on design. But I don’t think it’s just that. I saw what George and Giles Martin did with the Beatles songs in “Love” — that’s rather powerful, and revolutionary too, in a very quiet way. There’ll be some things that will be done that will make it much more current, I think.