THE U.S. VS JOHN LENNON 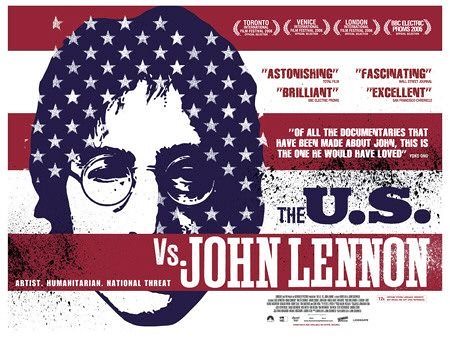 Yoko:
a) John felt he could not be himself, entirely. Of course, in reality, he did not suppress himself too much. But he was a guy who particularly hated to be boxed in.
b) After the Beatles, he wrote many beautiful, truthful and biting songs. If you haven’t heard them, this is the time to listen.
c) John had an incredible sense of history. He knew that he would be known for what he did as one of the Beatles and as an individual. He just didn’t want to go down as Paul’s help! (just kidding!)

Q: What’s your opinion about the fact that the “Lennon-McCartney” compositions were republished in recent years as “McCartney-Lennon”?

Yoko: They probably were in some printed matters, but the copyright has not been changed. It has always been and will be Lennon/McCartney. In the end of that big fiasco, Paul has publicly acknowledged that, too.

Q: Lennon was a great antiwar and social activist. Were his music and statements so dangerous to US administration ?

Yoko: Richard Nixon tried to deport him in 1972… It seems some people high up there were really concerned. Was he really dangerous to the US administration? I think not.

Q: If Lennon was not a white British but an Asian muslim and 1972 was, in fact, today …

Yoko: He would have said, go see US vs LENNON!

Q: Picasso was denied a visa to USA. Charlie Chaplin’s permit to stay in USA was revoked. They were accused of being communists or filo-communists. Can you comment on Lennon’s political ideology?

Yoko: John was a peacenik. In the US vs John Lennon film, you witness him giving that as the reason for having been given a hard time.

Q: John Lennon was a free man. Is USA a free country?

Yoko: No country is that free. No man is that free, either. It was not a question of his freedom having been suppressed. It was a question of his right as a person, according to the United States constitution, was not being respected by the then administration. Therefore, you see in this film, that John and I fought legally, and won.

Q: How much of Lennon’s artistic and social legacy was inspired or influenced by Yoko Ono?

Yoko: John and I made equal contribution to all of our projects. None of the project could have happened without the input of both of us.

Yoko: He was a driven artist. A driven person who believed in truth and justice. A driven man who loved life on this beautiful planet. He was simply driven – as if he knew that he didn’t have much time.

Q: Remember Bed-In. Lennon in love: part of a revolution?

Yoko: If you call an attempt to make the world a better place for all a revolution, then you can say it was a revolution of a kind. We believed in revolution, and thought we were doing something that would encourage that.

Q: Could you consider Lennon a playboy? He named himself a “Don Juan” in the Playboy interview.

Yoko: He was speaking of Don Juan as in Carlos Castanenda’s TEACHING OF DON JUAN, and saying that I, yoko, was his Don Juan.

Q: Please, name the artists Lennon admired most and let us know why.

Yoko: He admired so many artists, writers, philosophers, and activists in history, I will be doing disservice to him, if I tried to pick one name.

Yoko: I’m sure he would have invited Michael and his beloved wife and partner, Kathleen, for tea at the Dakota. I have done just that.

Q: Lennon in 2006: what would he say about Iraq, Guantanamo, Afghanistan, Al-Qaida, Bush?

Q: Lennon as an icon: do you agree with this image?

Yoko: He laid out his life for justice and truth for all. I am not suprised that he would be considered an icon.

Q: Would he agree with this icon? Or would he tear it apart?

Yoko: With what he knows now, I would think that he would accept it graciously. You will feel the same way, if your life was suddenly cut off like his, and still be robbed of your dignity, constantly, by the tabloid papers and books.

Q: Bono of U2 desperately wants to get a Nobel Prize for Peace. Would a today Lennon accept such a prize?

Yoko: I think there is something wrong with this mode of question. I don’t know that Bono wanted it DESPERATELY. Is that what Bono said, or is that your assumption? Anyway, where John is now, a Nobel Prize is so small he won’t be refusing it or accepting it. It’s like one bird singing to him. He may love it on that level.

Q: Is an artist really able to change the world? How?

Yoko: If you don’t see the change that was made by all artists of centuries and centuries, with people like Leonardo Da Vinci as an example, it’s pointless to talk to you on this subject. Artists are peace soldiers, if you will. They have done wonders for the human race.

Q: Please, name a question you would consider representative for both Lennon the man and Lennon the artist.

Yoko: Now, you want me to do your job! I think you covered it, and I did, too. Case closed.