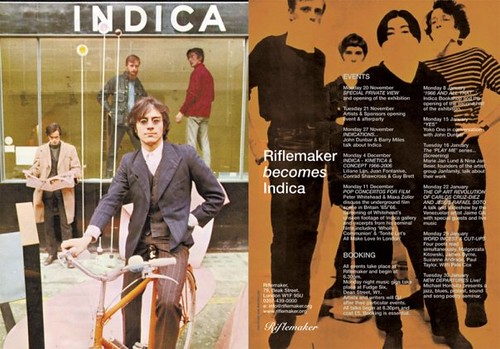 “In those days, I only made money by lecturing, so I thought it would be good to charge people for their participation in my artwork. I asked the man to pay five shillings for his participation in the Hammer-A-Nail In painting. He only hammered an imaginary nail in. Next, he grabbed an apple off a pedestal – another artwork of mine – and ate it. I didn’t like that at all.”

Q. Why did you choose Indica above all the other galleries for your first show in London?

Yoko: Indica was the only fresh and cutting edge gallery at the time in London which fit my work like socks. I exhibited works like APPLE, YES, HAMMER-A-NAIL-IN PAINTING. Indica gave me a space where I could be free and express my ideas – it was a comfort zone in an otherwise cold and snobby art world that really didn’t get me yet.

Q. What impression did John Dunbar make when you first met him?

Yoko: With his granny spectacles and Oxford accent, I thought he epitomized cool.

Q. Other than meeting John Lennon, what were the other high points that you remember from that exhibition?

Yoko: Roman Polanski and Sharon Tate dropped in. They spotted Play It By Trust – my all-white chess board, and started playing. I was surprised how beautiful and elegant Sharon was. Roman had a certain European elegance in his manner, too. I was totally impressed by both of them.

Q: What would you consider to be Indica’s lasting impact on the development of conceptual/op art?

Yoko: While the American art world was still giving heavy credence to Abstract Expressionism and Pop Art, Indica was daring to present the Indication of where art was going in the future. I think Brits should know that. You are now taking the art world by it’s horns, so to speak. But it didn’t start now. It started with Indica.

Q: What were your feelings when you heard that there was going to be a revival of Indica?

Q. How are you planning to contribute to the retrospective at Riflemaker?

Yoko: In tribute to the courage and insight John Dunbar had at the time to indicate the future, I would like to do more or less what I’m asked to do by him. But not standing on my head, pls! I need help for that… and I refuse help!