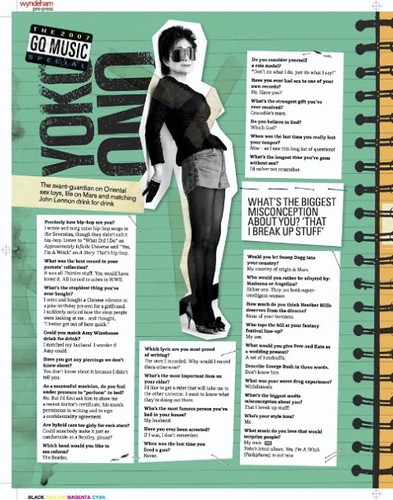 Precisely how hip-hop are you?
I wrote and sung some hip-hop songs in the Seventies, though they didn’t call it hip-hop in those days. Listen to “What Did I Do” on Approximately Infinite Universe and “Yes, I’m A Witch” on A Story. That’s hip-hop.

What was the best record in your parents’ collection?
All Thirties stuff. You would have loved it. All turned to ashes in WWII.

Could you match Amy Winehouse drink for drink?
I matched my husband. I wonder if Amy could.

As a successful musician, do you feel under pressure to “perform” in bed?
No. But I’d first ask them to show me a recent doctor’s certificate, his mom’s permission in writing, and to sign a confidentiality agreement.

Are hybrid cars too girly for rock stars?
Could somebody make it just as comfortable as a Bentley, please?

Which band would you like to see reform?
The Beatles.

Which lyric are you most proud of writing?
The ones I recorded. Why would I record them otherwise?

What’s the most important item on your rider?
I’d like to get a rider that will take me to the other Universe. I want to know what they’re doing out there.

Who’s the most famous person you’ve had in your house?
My husband.

Have you ever been arrested?
If I was, I don’t remember.

When was the last time you fired a gun?
Never.

Do you consider yourself a role model?
“Don’t do what I do. Just do what I say!”

Have you ever had sex to one of your own records?
No. Have you?

Do you believe in God?
Which God?

When was the last time you really lost your temper?
Now – As I read these long line of questions!

What’s the longest time you’ve gone without sex?
I’d rather not remember.

Would you let Snoop Dogg into your country?
My country of origin is Mars.

Would you rather be adopted by Madonna or Angelina?
Either one.

How much do you think Heather Mills deserves from the divorce?
None of your business.

Who tops the bill at your fantasy festival line-up?
My son.

What would you give Pete Doherty and Kate Moss as a wedding present?
A set of handcuffs.

What was your worst drug experience?
Withdrawals.

What’s the biggest media misconception about you?
That I break-up stuff!

Who’s your style icon?
Me.

What music do you love that would surprise people?
My own.

And the ones they didn’t publish…

Where do you stand on leather trousers?
It excites me just as real leather.

What’s the worst thing a critic has ever said about you?
When he said nothing.

Is it time for Robbie to admit defeat and rejoin Take That?
Excuse me?

Should the Arctic Monkeys cheer up a bit?
For what reason?

How far would you get on American idol?
I applaud each one of them for being so courageous.

Who would play you in Calvin Harris the musical?
I hope nobody.

Who runs your MySpace site?
Whoever is running it, be kind…

If Tony Blair reformed Ugly Rumours, would you go to his gig?
I might.

Scale of one to ten: how good looking are you?
I’m doing alright.

Describe the way you dance.
Till dawn.

What would you miss most if you weren’t famous any more?
Now, let me think…

What do you consider the most rock’n’roll holiday destination?
Anywhere you enjoy.

What’s the best ever book about pop music?
One that doesn’t trash anybody.

Have you looked yourself up on YouTube?
I haven’t gotten around to it.