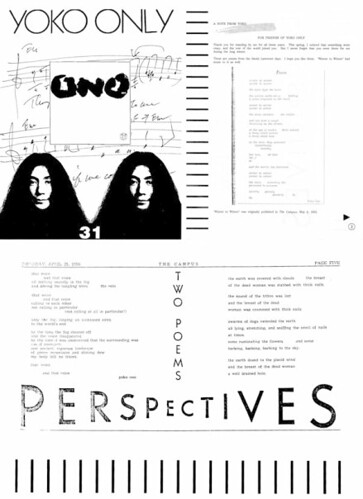 the snow dyes the town

the woman walks alongholding
a grass fragment in her hand.

In the snow they animaled
mysteriously
soundly,

but now,all that
far, f
ar

and the mirror, too deformed.

the snow,extending the
pavement to universe

only the fog, ringing an unintoned siren
to the world’s end

by the time the fog cleared off
and the voice disappeared
by the time it was understood that the surrounding was
(as if emerged)
and ancient, vigorous landscape
of green mountains and shining dew
my body left no traces.

THE EARTH WAS COVERED IN CLOUDS (1956)
the earth was covered with cloudsthe breast
of the dead woman was stabbed with thick nails.

swarms of dogs extended the earth
all lying, stretching, and sniffing the smell of nails
at times.
some ruminating the flowers and some
barking, barking, barking to the sky

the earth dozed to the placid wind
and the breast of the dead woman
a well drained hole.

A Note from Yoko Ono: For Friends of Yoko Only (1992)
Thank you for standing by me all these years. This spring, I noticed that something went crazy, and the rest of the world joined you. But I never forget that you were there for me during the long winter.

These are poems from the Sarah Lawrence days. I hope you like them. “Winter to Winter” had music to it as well.

All reprinted with new introduction in Yoko Only fanzine, Summer 1992
(special thanks to Brian Hendel).