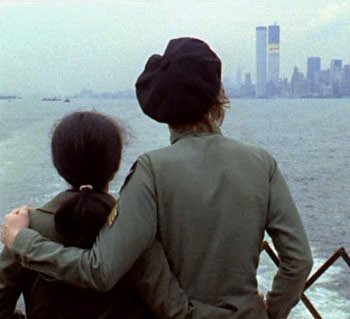 9/11 affected me like it affected you. It was frightening. I was in New York and I was frightened. In my life, the most scary thing that had happened was World War II. I was in Tokyo when enemy planes were coming in, bombing the city. So I see it a little differently to the Americans who had never experienced an attack on their homeland. Pearl Harbor was different because it was on an island, further away.

I thought of 3 things on September 11th: first was the second World War, second was the day of John’s passing – because it happened equally unexpectedly – and third were the people who lost their partner or a family member.

After 9/11 many artists asked: What can we do now?
Together – art and music – can cover the world and make it peaceful.
Art is international so all of us can benefit from it.

Following the political changes through the year after 9/11, I felt terribly vulnerable – like the most delicate wind could bring me tears. It was as though everything I believed in was rapidly melting away, while I continued walking still carrying my beliefs. The front page of the papers and the TV news were feeding us what they wanted to – assaulting our senses. Men without faces were at work. Force and intimidation were in the air. People were silenced. I always thought I wanted to live forever, that I was one person who was not scared of doing so. But would I want to live surrounded by this world as we know now? Some people went to Palestine to act as human shields. That really touched me. If all of us stood to become human shields instead of machine gunning each other… My immediate thought was to join them. I almost did, and didn’t. Later, the world heard of the death of Rachel Corrie. She made her stand for all of us.

Imagine all the people living life in peace. I think that that’s a very strong thing to do. It might be a very controversial thing to do. Because it’s a very powerful thing to do. But I think it’s all right to say that. I don’t think that goes against the policy of this country or anything like that. I think, in the end, all people in this country really want peace. But how to get there, some people are thinking in a different way of course. But imagining, that’s something that we can all do, even when we have different opinions about how to get there. Imagining peace, imagining peace. That’s okay. That we can all do, without feeling the conflict.

I am now on the road promoting IMAGINE PEACE – going from Germany to Italy to Poland to Iceland to Britain to China to Japan. Today, on 9/11, I am in the air flying from one city to another.

On this day, don’t forget to
Think PEACE, Act PEACE, and Spread PEACE
and tell your friends to IMAGINE PEACE.

Remember we are family.
I love you!
yoko