I was very moved by Emma Watson’s excellent #HeForShe speech about gender equality.

Join the pledge for #HeForShe at http://www.heforshe.org/#take-action.

By the way, in October 2013, I was invited to Hirshorn Museum in D.C., to be one of the three artists to talk about “Damage Control” in Art. in the end of our dialogue I said something about feminism. What I said was taking an angle of feminism that is very different from what Emma stated on feminism. She was speaking of equality. I was speaking of empathy. Feminism is a vast issue. So that each of us take different angles and speak about it is very healthy. We are all working for the same thing. Each woman’s words on Feminism are “sacred” because it comes from the heart and the experiences we had in life of being a woman. Every time a woman dares to speak out, it adds to the power of our world and its great future.

Yoko: Because we are dealing with Women’s matters, I’m reading so many books. Well, it seems like I’m forced to read these things without knowing about the suffering of men. And sometimes they are private. And there is a thing called ‘The Suffering of Men’.

Yoko: But they don’t even want to say it because it’s a tradition that macho guys should never complain (or something like that). And therefore it’s very deep. And I’ve seen a documentary film of men who came back from the war and they lost their legs and their arms. And about five of them are just jumping on the bed. Enough to have some exercise. And it’s just so sad. But they’re not complaining.

So I think that the next stage of our game is to be totally understanding about each other. And we have to reach out our hands to men as well. Because they don’t know what they’re doing. (laughs). 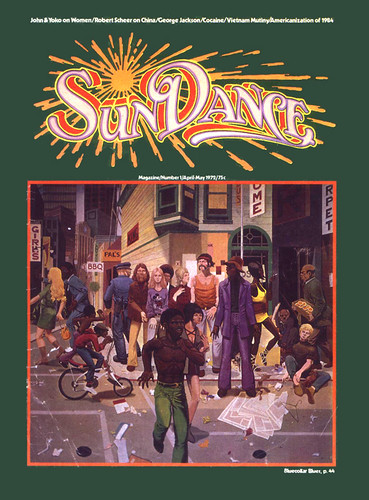 THE FEMINIZATION OF SOCIETY


The aim of the feminist movement should not just end with getting more jobs in the existing society, though we should definitely work on that as well. We have to keep on going until the whole of the female race is freed.

How are we going to go about this? This society is the very society that killed female freedom: the society that was built on female slavery. If we try to achieve our freedom within the framework of the existing social set-up, men, who run the society, will continue to make a token gesture of giving us a place in their world. Some of us will succeed in moving into elitist jobs, kicking our sisters on the way up. Others will resort to producing babies, or being conned into thinking that joining male perversions and madness is what equality is about: “join the army” “join the sexist trip,” etc.

The major change in the contemporary woman’s revolution is the issue of lesbianism. Lesbianism, to many, is a means of expressing rebellion toward the existing society through sexual freedom. It helps women realize that they don’t necessarily have to rely on men for relationships. They have an alternative to spending 90% of their lives waiting for, finding and living for men. But if the alternative to that is finding a woman to replace the man in her life, and then build her life around another female or females, it isn’t very liberating. Some sisters have learned to love women more deeply through lesbianism, but others have simply gone after their sisters in the same manner that the male chauvinists have.

The ultimate goal of female liberation is not just to escape from male oppression. How about liberating ourselves from our various mind trips such as ignorance, greed, masochism, fear of God and social conventions? It’s hard to so easily dismiss the importance of paternal influence in this society, at this time. Since we face the reality that, in this global village, there is very little choice but to coexist with men, we might as well find a way to do it and do it well.

We definitely need more positive participation by men in the care of our children. But how are we going to do this? We have to demand it. James Baldwin has said of this problem, “I can’t give a performance all day in the office and come back and give a performance at home.” He’s right. How can we expect men to share the responsibility of childcare in the present social conditions where his job in the office is, to him, a mere “performance” and where he cannot relate to the role of childcare except as yet another “performance”? Contemporary men must go through major changes in their thinking before they volunteer to look after children, and before they even start to want to care.

Childcare is the most important issue for the future of our generation. It is no longer a pleasure for the majority of men and women in our society, because the whole society is geared towards living up to a Hollywood-cum-Madison Avenue image of men and women, and a way of life that has nothing to do with childcare. We are in a serious identity crisis. This society is driven by neurotic speed and force accelerated by greed, and frustration of not being able to live up to the image of men and women we have created for ourselves; the image has nothing to do with the reality of people. How could we be an eternal James Bond or Twiggy (false eyelashes, the never-had-a-baby-or-a-full-meal look) and raise three kids on the side? In such an image-driven culture, a piece of reality, such as a child, becomes a direct threat to our false existence.

The only game we play together with our children is star-chasing; sadly, not the stars in the sky, but the “STARS” who we think have achieved the standard of the dream image we have imposed on the human race. We cannot trust ourselves anymore, because we know that we are, well…too real. We are forever apologetic for being real. Excuse me for farting, excuse me for making love and smelling like a human being, instead of that odorless celluloid prince and princess image up there on the screen.

Most of us, as women, hope that we can achieve our freedom within the existing social set-up, thinking that, somewhere, there must be a happy medium for men and women to share freedom and responsibility. But if we just took the time to observe the very function of our society, the greed-power-frustration syndrome, we would soon see that there is no happy medium to be achieved. We can, of course, aim to play the same game that men have played for centuries, and inch by inch, take over all the best jobs and eventually conquer the whole world, leaving an extremely bitter male stud-cum-slave class moaning and groaning underneath us. This is alright for an afternoon dream, but in reality, it would obviously be a drag.

Just as the blacks have in the past, women are going through an initial stage of revolution now. We are now at a stage where we are eager to compete with men on all levels. But women will inevitably arrive at the next stage, and realize the futility of trying to be like men. Women will realize themselves as they are, and not as beings comparative to or in response to men. As a result, the feminist revolution will take a more positive step in the society by offering a feminine direction.

In their past two thousand years of effort, men have shown us their failure in their method of running the world. Instead of falling into the same trap that men fell into, women can offer something that the society never had before because of male dominance. That is the feminine direction. What we can do is to take the current society, which contains both masculine and feminine characteristics, and bring out its’ feminine nature rather than its’ masculine force which is now at work. We must make more positive usage of the feminine tendencies of the society which, up to now, have been either suppressed or dismissed as something harmful, impractical, irrelevant and ultimately shameful.

I am proposing the feminization of society; the use of feminine nature as a positive force to change the world. We can change ourselves with feminine intelligence and awareness, into a basically organic, noncompetitive society that is based on love, rather than reasoning. The result will be a society of balance, peace and contentment. We can evolve rather than revolt, come together, rather than claim independence, and feel rather than think. These are characteristics that are considered feminine; characteristics that men despise in women. But have men really done so well by avoiding the development of these characteristics within themselves?

Already, as I catch a glimpse of the new world, I see feminine wisdom working as a positive force. I refer to the feminine wisdom and awareness which is based on reality, intuition and empirical thinking, rather than logistics and ideologies. The entire youth generation, their idiom and their dreams, are headed in a feminine direction. A more advanced field of communication, such as telepathy, is also a phenomenon which can only be developed in a highly feminine climate. The problem is that feminine tendency in the society has never been given a chance to blossom, whereas masculine tendency overwhelms it.

What we need now is the patience and natural wisdom of a pregnant woman, an awareness and acceptance of our natural resources, or what is left of them. Let’s not kid ourselves and think of ourselves as an old and matured civilization. We are by no means mature. But that is alright. That is beautiful. Let’s slow down and try to grow as organically, and healthfully as a newborn infant. The aim of the female revolution will have to be a total one, eventually making it a revolution for the whole world. As mothers of the tribe, we share the guilt of the male chauvinists, and our faces are their mirrors as well. It’s good to start now, since it’s never too late to start from the start.

This is for our sisters all over the world
love,

We lost our green land, we lost our clean air
We lost our true wisdom and we live in despair.

Wisdom, O Wisdom
That’s what we ask for
And yes, my dear sisters
We must learn to ask.

Sisters, O Sisters
Let’s wake up, right on
It’s never too late
To shout from our hearts.

Freedom, O Freedom
That’s what we fight for
And yes, my dear sisters
We must learn to fight.

Sisters, O Sisters
Let’s give up no more
It’s never too late
To build a New World.

New World, O New World
That’s what we live for
And yes, my dear sisters
We must learn to live.