Last year Yoko sent me 5000 badges to share with schoolchildren in Australia who helped me collect blankets for Mongolians.

I organised the Magical Mongolian Blanket Bus as a celebration of the 40th anniversary of ther Beatles’ Magical Mystery Tour, as well as being a practical way of collecting and moving blankets down the east coast of Queensland.

A chronology of our project can be found at www.blankets4mongolia.com


As it turned out I had many badges to spare and decided to share them with Mongolian children from the Gobi Desert who I met just recently whilst delivering blankets for Mongolian hospitals and schools etc. Please find 2 messages which describe my recent trip to Mongolia, and which hopefully show that Peace can be Imagined and made real.

These delivery pictures were all taken in the Gobi Desert between Oct 9 and Oct 11, 2008. The truck which I accompanied for this distribution is also seen being packed in Ulaan Baatar on Oct 2. The distance between the UB storage and the nearest Gobi soum (village) to receive blankets during the trip, is 800km.

These pics are from my recent visit to Mongolia – in fact some blankets had already been distributed before I arrived, and many more will continue to be distributed over the next 3 to 6 months … it is not such an easy thing to organise:) For instance, the Bayangovi hospital which triggered my 1st collection, is now very well stocked with blankets, sheets and pillows. Their supply was topped up in July so there was no need to deliver more blankets to the hospital. We instead were planning more blankets for the soum dormitory, but the unexpected participation of my Mongolian friend and partner Bodio, in the Bayangovi local election meant that he could not be seen to be  delivering gifts until after election day, so …. Anyway, he won the election and I now have a government contact in Mongolia who is there for the right reasons!

Of course also, we delivered ‘Imagine Peace’ badges to the school kids at Bayanlig and Bayangovi, and those special pics are coming soon – only a select group of schools in Mongolia and Queensland received these gifts from Yoko Ono. Oct 9 was of course the 68th anniversary of the birth of John Lennon, and on the same day as we ‘made warm not war!’ in Bayanlig, a statue of the Fab Four was unveiled in Ulaan Baatar. 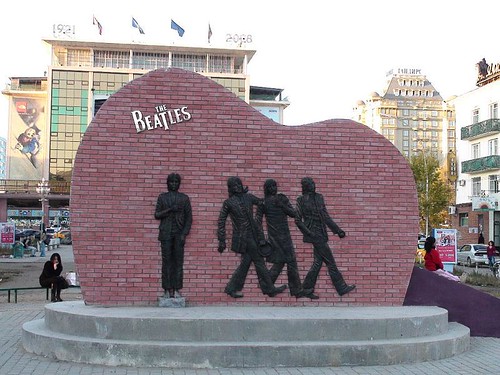 Thank you to everyone …
…but the Magical Mongolian Tour continues …

Thank you, Barry.
What you did is beautiful.
With love, yoko 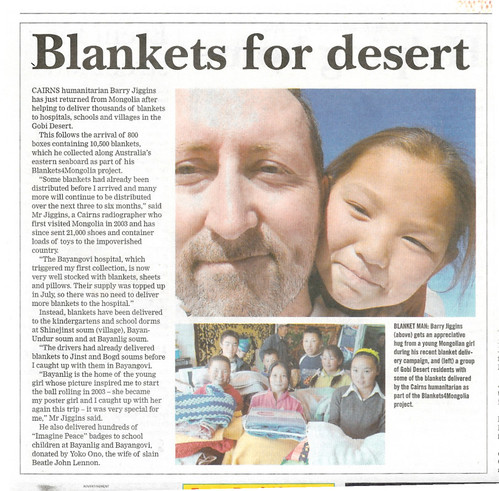 CAIRNS humanitarian Barry Jiggins has just returned from Mongolia after helping to deliver thousands of blankets to hospitals, schools and villages in the Gobi Desert. This follows the arrival of 800 boxes containing 10,500 blankets, which he collected along Australia’s eastern seaboard as part of his Blankets4Mongolia project.

“Some blankets had already been distributed before I arrived and many more will continue to be distributed over the next three to six months”, said Mr Jiggins, a Cairns radiographer who flrst visited Mongolia in 2003 and has since sent 21,000 shoes and container loads of toys to the impoverished country.

“The Bayangovi hospital, which triggered my first collection. is now very well stocked with blankets, sheets and pillows. Their supply was topped up in July, so there was no need to deliver more blankets to the hospital.”

Instead, blankets have been delivered to the kindergartens and school dorms at Shinejinst soum (village), Bayan-Undur soum. and at Bayanlig soum.

“The drivers had already delivered blankets to Jinst and Bogd soums before I caught up with them in Bayangovi. Bayanlig is the home of the young girl whose picture inspired me to start the ball rolling in 2003 – she became my poster girl and I caught up with her again this trip- it was very special for me”, Mr Jiggins said.

He also delivered hundreds of IMAGINE PEACE badges to School children at Bayanlig and Bayangovi. donated by Yoko Ono. the wife of slain Beatle John Lennon. 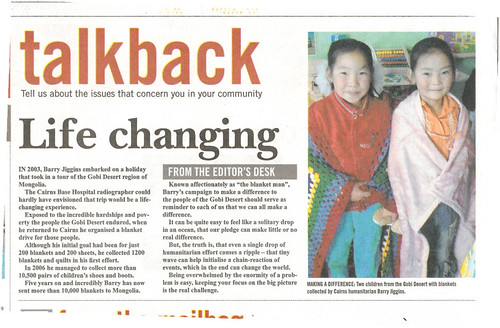 In 2003, Barry Jiggins embarked on a holiday that took in a tour of the Gobi desert region of Mongolia.
The Cairns Base Hospital radiographer could hardly have envisioned that the trip would be a life-changing experience.
Exposed to the incredible hardships and poverty the people the Gobi desert endured, when her returned to Cairns he organised a blanket drive for those people.
Although his intial goal had been for just 200 blankets and quilts in his first effort.
In 2006 he managed to collect more than 10,500 pairs of childrens shoes and boots.
Five years on and incredibly Barry has now sent more than 10,000 blankets to Mongolia.

Known affectionately as “the blanket man”, Barry’s campaign to make a difference to the people of the Gobi Desert should serve as reminder to each of us that we can all make a difference.
It can be quite easy to feel like a solitary drop in an ocean, that our pledge can make little or no real difference.
But the truth is, that even a single drop of humanitarian effort causes a ripple – that tiny wave can help initialise a chain reaction of events which in the end can change the world.
Being overwhelmed by the enormity of a problem is easy, keeping your focus on the big picture is the real challenge.

Thank you to everyone who supported or donated items for our stalls 4 Mongolia. On Tuesday Katy will deposit $870 into the account of the Mongolian Consulate in Australia. Our efforts will help even more blankets and orphans’ presents find a new home in Mongolia very soon enough.

Next year we kick off our own new programs 4 Mongolia … watch this space:)