“I am standing here because I was once a prisoner of conscience. As you look at me and listen to me, please remember the often repeated truth that one prisoner of conscience is one too many. Those who have not yet been given access to the benefits of justice in my country number much more than one. Please remember them and do whatever is possible to affect their earliest, unconditional release. I thought of that great mass of the uprooted of the earth who have been torn away from their homes, parted from families and friends [and] forced to live out their lives among strangers who are not always welcoming.” 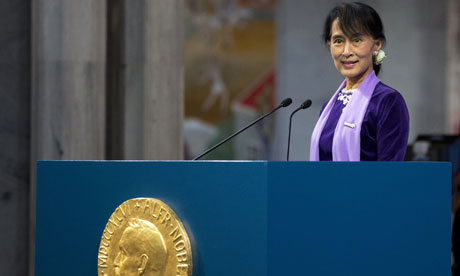 In an event hailed as the “most remarkable in the entire history of the Nobel prizes”, Aung San Suu Kyi, the Burmese democracy campaigner, delivered her acceptance speech for her peace prize in Oslo’s vast City Hall more than two decades after it was awarded.

Given the prize in 1991 – but by then under house arrest by Burma‘s military junta – it was left to her two sons, Alexander and Kim, to travel toNorway to receive the peace prize that year. Able to travel freely after 21 years, Aung San Suu Kyi stood in front of a packed hall, in which Norwegian dignitaries rubbed shoulders with Buddhist monks in saffron robes and Burmese guests in traditional costumes, to deliver her long-delayed acceptance speech in a moment of high emotion.

Commended in the original citation for her “non-violent struggle” as “one of the most extraordinary examples of civil courage in Asia in recent decades”, the 66-year-old activist, elected to the country’s national assembly during its fragile political transition, recalled with typical self-effacement the moment at which she heard she had been awarded the peace prize.

“I heard the news on the radio one evening. I’ve tried very hard to remember what my immediate reaction to the announcement of the award had been. I think it was something like: ‘Oh … so they’ve decided to give it to me’.”

Aung San Suu Kyi arrived in Norway from Switzerland, her first stop on a two-week tour of Europe. The journey is her first in Europe since 1988, when she left her husband and two young sons in England to visit her ill mother in Burma and became the focal point for the nascent democracy movement.

She made a wide-ranging, deeply personal lecture, which touched on her feelings of isolation under house arrest, the Buddhist concept of suffering, human rights and her hopes and fears for her country’s future, and the importance of the peace prize itself.

“It did not seem quite real because in a sense I did not feel myself to be quite real at that time,” she said. “Often during my days of house arrest it felt as though I were no longer a part of the real world.

“What the Nobel peace prize did was to draw me once again into the world of other human beings outside the isolated area in which I lived, to restore a sense of reality to me. This did not happen instantly, of course, but as the days and months went by, and news of reactions to the award came over the airwaves, I began to understand the significance of the Nobel prize. It had made me real once again.

“What was more important, the prize had drawn the attention of the world to the struggle for democracy and human rights in Burma. We were not going to be forgotten. When the Nobel committee awarded the peace prize to me, they were recognising that the oppressed and the isolated in Burma were also a part of the world, they were recognising the oneness of humanity … The Nobel peace prize opened up a door in my heart.”

Talking about the motivation in a period during which she was separated from her family and her British husband, the academic Michael Aris, died, she said: “If I am asked why I am fighting for democracy in Burma, it is because I believe that democratic institutions and practices are necessary for the guarantee of human rights.

“When I joined the democracy movement in Burma, it never occurred to me that I might ever be the recipient of any prize or honour. The prize we were working for was a free, secure and just society where our people might be able to realise their full potential.”

Thorbjørn Jagland, chairman of the Nobel committee, who introduced her, said: “Today’s event is one of the most remarkable in the entire history of the Nobel prizes … We hope that Liu Xiaobo [the Chinese political activist] will not have to wait as long as you have before he can come to Oslo.”

Jagland recalled how, when the peace prize celebrated its 100th anniversary in 2001 with more than 30 laureates in attendance, “we left one chair empty [for her]”.