This premiere exhibition and sale of Julian Lennon’s stunning collection of limited edition and hand signed portraiture and landscape photography, entitled Timeless, is curated by one of the most sought after celebrity photographers, Timothy White and sponsored by Lennon’s charity, The White Feather Foundation, Duggal Visual Solutions, Inc. and Canson Inc., creators of the world’s finest Fine Art and Photo Papers: Canson Infinity.

“I have always felt that I have observed life, in a different way than others; probably because my life has been very different than most. Music has always been one creative outlet for me, but now I’m happy to add another one too, that being photography.”
– Julian Lennon

Julian Lennon developed a love for photography at a very young age and over the years has been perfecting his work.

TIMELESS will showcase Lennon’s landscape work, and also take us into his studio where he recently photographed U2 as they recorded their newest album.

In addition, Lennon takes us behind the scenes for a photographic look at the Sean Lennon tour. Lennon has enjoyed an accomplished music career, including multiple awards from 1985 onward.

His much anticipated sixth album, Everything Changes, will be released in early 2011.

Lennon has been focused on making a difference in what has become a rather sensitively-balanced world.

The White Feather Foundation embraces environmental and humanitarian issues in conjunction with partners from around the world and works to raise funds for the betterment of all life, and to honor those who have truly made a difference.

Peter Blachley, co-owner of the Morrison Hotel Gallery says, “Timothy White has captured the essence of Julian’s style as we witness the emergence of a fine new photographer. We are very excited about working with Julian’s photography and being the first gallery in the world to present his artwork.”

“We are delighted that Julian Lennon selected our fine art papers for his new exhibit ‘Timeless’,” said Robert Toth, Vice President of Marketing at Canson. “Julian’s photography has left us with a lasting impression and we are thrilled to be a part of this exhibition at the Morrison Hotel Gallery.”

Also sponsoring this exhibit is Duggal Visual Solutions, Inc., one of the nation’s top photo/imaging facilities, and supplier of printing, imaging, wide format graphics, and display services. Duggal was incorporated in 1963 and is based in New York City.

Julian Lennon On His New Photos of U2, Kate Hudson

“My dad wasn’t really a photographer, so it just allows me to breathe a little more,” says Lennon. “This is my own thing.”
Plus: Yoko Ono, Sean Lennon, Patti Boyd at the gallery opening.

Midway through the evening, Yoko Ono, Sean and Julian Lennon themselves emerged into the room for a tour, laughing together and pausing to look at intimate shots of U2.

“My dad wasn’t really a photographer, so it just allows me to breathe a little more,” Lennon told Rolling Stone. “He used to take a couple Polaroid’s, but it wasn’t a potential career. This is my own thing.”

May Pang, Lennon’s girlfriend during his eighteen-month “Lost Weekend” between 1973 to 1975, also attended — making it the first time she, Cynthia Lennon, Yoko Ono, Sean and Julian have all been in the same room together.

The photos fell into two categories: landscapes, and portraits of celebrity friends like Kate Hudson and U2, shot as they recorded their next album.

Lennon said he became serious about his hobby when he spent two weeks on the road with Sean Lennon as Sean toured Eastern Europe.

“I surprised him on the road,” Lennon says. “I literally turned up at a gig.”

Lennon says U2 approached him earlier this summer looking for a studio to finish some tracks. He offered at his 14th century home in the South of France.

“The Edge came to me and said ‘Please take some pictures,” Lennon recalls.

Displayed were several intimate black-and-white shots of the band: a close-up of Bono’s weathered-seeming face, a candid of Adam Clayton sitting alone on a white stairwell, and the Edge sitting in a booth on a plane, with a lyric sheet in front of him.

“To a degree, it’s a side of the boys that hasn’t been seen before … I just didn’t want to get in the way,” Lennon said. “The moment I thought there was any heavy air, I would clear out.”

One of the most striking U2 shots is of Bono in the studio, sitting underneath a headshot of John Lennon in his early greaser days. “Initially, I called it a Lennon Sandwich,” Julian said. “Now I call it ‘Someone To Look Up To.’ Bono was there, and I look up to him, and he looks up to dad.”

Lennon also shot the band onstage in Vienna in late August. “They’re mates, so if they’re on the road and I’m in the neighborhood, I’m there.”

For music, Lennon played the instrumental version of his first full album since 1998’s Photograph Smile.

He told Rolling Stone the album has been finished for three years, but he hasn’t released yet because of frustrations with the music business. He does, however, expect to put it out this spring.

“In some ways the photography will bring people back to the music,” Lennon observed. “The process of doing [photo] work and getting it out to the public is a lot smoother than the road I’ve had with music.”

“Dad once said to me that should he pass away, if there was some way of letting me know he was going to be ok, that we were all going to be ok, the message would come to me in the form a white feather. Then something happened to me about ten years ago when I was on tour in Australia. I was presented with a white feather by an Aboriginal tribal elder, which definitely took my breath away. One thing for sure is that the white feather has always represented peace to me.”

The Morrison Hotel Gallery is about people. Founded in 2001 by former record company executive and producer Peter Blachley, former independent record store owner Rich Horowitz and music photographer Henry Diltz, The Morrison Hotel Gallery has grown to become the major brand in fine art music photography. As you view some of the most inspiring and iconic images of music and musicians photographed over the last fifty-plus years, think about the people who existed on both sides of the lens. They most likely had no idea what they were creating or how timeless the image would become. Music photography elicits an emotional reaction that is unique to all of us. It is no more than one-second of life at the time it takes to click the shutter. But what is forever frozen is timeless, and that’s what draws us to the photographs. We as people can’t live forever, but it seems as though the images do.

War is over: Peace in the Lennon family as Yoko, Julian and Sean are pictured together for the first time in years

Julian Lennon and Yoko Ono have been locked in a feud for years, but it seems the pair has finally managed to overcome its differences.

Ono, 77, and her son with John Lennon, Sean, both turned out to support Julian’s new art exhibition in New York last week.

And the group put on a united front, posing for photographers for the first time in years, and looking every bit the happy family. 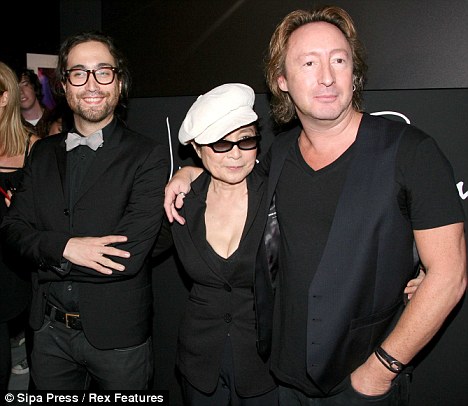 Julian, 47, Lennon’s son with his first wife Cynthia, has had a series of public spats with Ono in the past over The Beatles’ legacy.

He has accused his father’s second wife of manipulating her son Sean, 34, and battled with her over his late father’s estate. 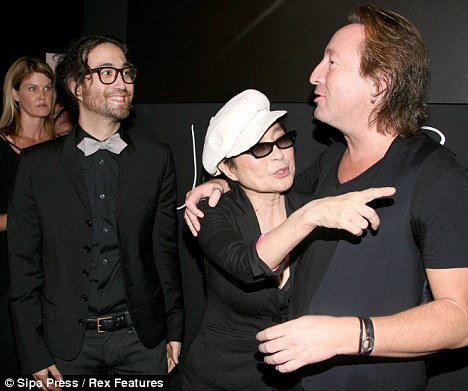 All you need is love: John Lennon’s two sons exchange a smile as Yoko hugs Julian.

But it seems they are now back on good terms, with the group laughing and hugging at the portraiture and landscape photography exhibition at the Morrison Hotel.

‘Things are good between us,’ Julian told the New York Post.

‘Whenever I’m in New York we all get together. Sean even asked me to shoot his album cover — for free, of course.’ 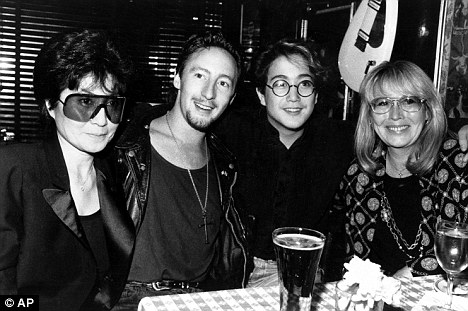 Let It Be: from right, Yoko, Julian and Sean – along with Julian’s mother Cynthia – have rarely been pictured together.
They were captured together in 1989 at the Hard Rock Cafe in New York to celebrate one of Julian’s concerts