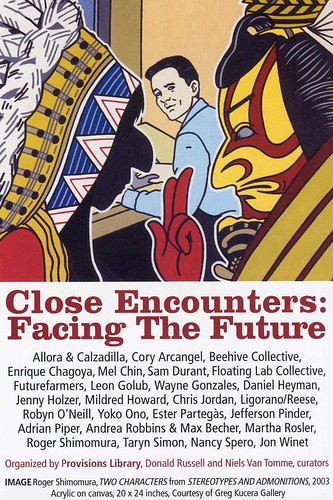 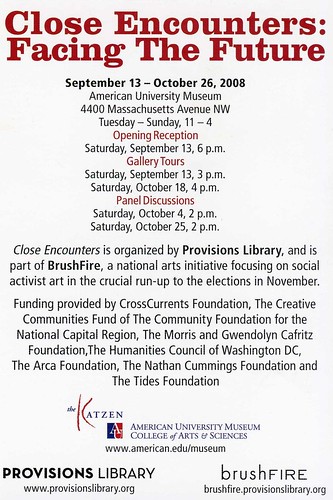 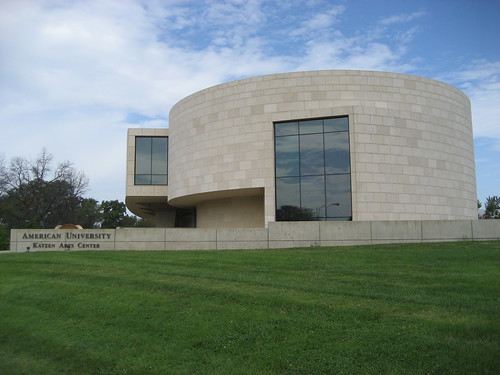 The entire show, which encourages viewers to change current world issues, not only political affairs but also personal issues, is being held on the second and third floors of the museum. 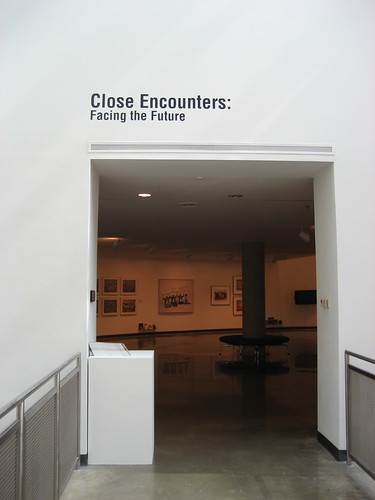 Close to the entrance of the show on the second floor, the following art statement is printed on the panel:
“Facing environmental devastation, ongoing wars, ethnic discrimination,
spiraling demand for health care, economic recession and the decline of
democratic values cannot be made easy.
Our intention of Close Encounters is to create an autonomous zone — a
workshop — where difficult questions and ideas about the state of the world can
interact in sometimes disturbing but always thought-provoking ways.  We are
fortunate to be living in a time where many significant artists are producing
works of art that are both of high quality as art and as social commentary.  Close
Encounters is a reflection of this momentous time in which we have a bounty of
unparalleled ways to see our future through critical and optimistic eyes.
Close Encounters extents beyond strictly artistic and theoretical approaches
and invites the viewer to connect directly with the art and issues st stake.
Bringing together key contemporary artists, the exhibition provides a mosaic of
current United Sates conditions and circumstances.  The exhibition’s design,
which includes relevant books from Provisions Library, invites deeper reflection
and dialogue.
Like the character of Steven Spielberg’s classic film Close Encounters of the
Third Kind, we find ourselves confronting and attempting to communicate with
an unknown reality.  The exhibit is about an essential and fearless confrontation
with diverging visions.  But, this is not a science fiction we are facing; we are
finding future meanings and directions for our society.
Donald H. Russel and Niels Van Tomme, Curators, Provisions Library”
The second floor is filled with amazing artworks by various artists.  Some of the works could be controversial. 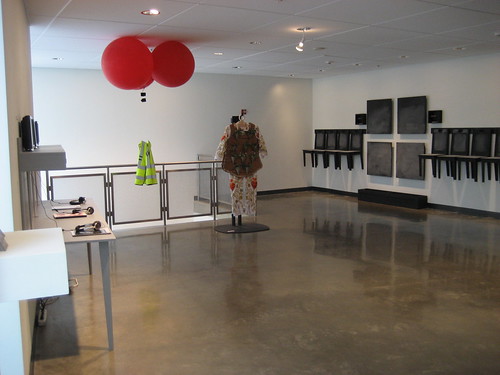 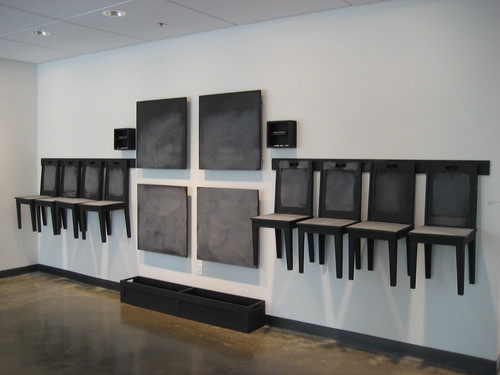 For instance, there is an assemblage which looks like a woman’s breasts from a distance.  When you get closer to examine it, you realize that the assemblage is made out of thousands of Barbie dolls (“Barbie Dolls 2008” by Chris Jordan).  The panel next to the work explains, “Barbie Dolls depicts 32,000 Barbies, equal to the number of elective breast augmentation surgeries performed monthly in the US in 2006.” 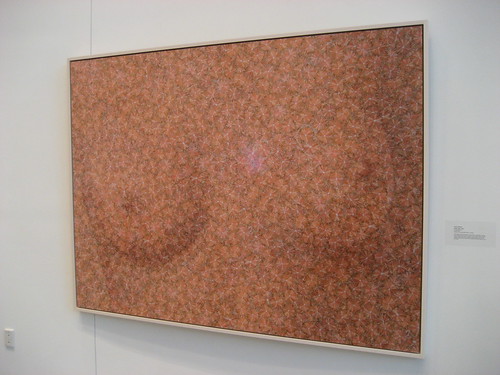 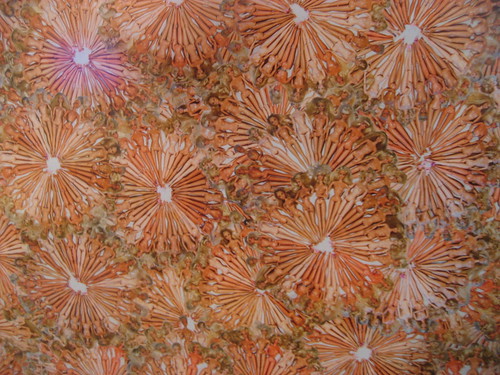 The other interesting work is by Mildred Howard, entitled “Volume I & II: The History of the United States with a Few Missing Parts, 2007“.  Two books about American history which are lying opened are presented on a pedestal.  The books are riddled with holes.  The holes were made by bullets.  As the books indicate here, American history goes hand in hand with bloody violence. 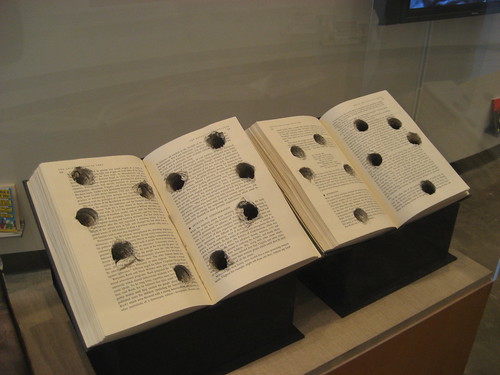 While I was wandering around the second floor, looking for Yoko Ono‘s work and contemplating the social issues that the artists presented through their works, I kept hearing the sound of chirping birds coming from somewhere above.  It almost sounded like a protest from the animal kingdom against what we, human beings, have been doing to this planet and how much it is affecting the animals’ habitats as well.
Guided by the sounds of the birds, I headed toward the third floor.  When my eyes caught a glimpse of green leaves, and the sound of birds chirping got louder, my heart filled with surprise and sheer joy.  Before turning the corner and seeing the actual work, I knew which work by Yoko would be there.  Sure ‘nough, when I caught the title of the work printed in black letters on the white wall, I was overjoyed that my assumption turned out to be correct; it read, “Ex It  Yoko Ono“. 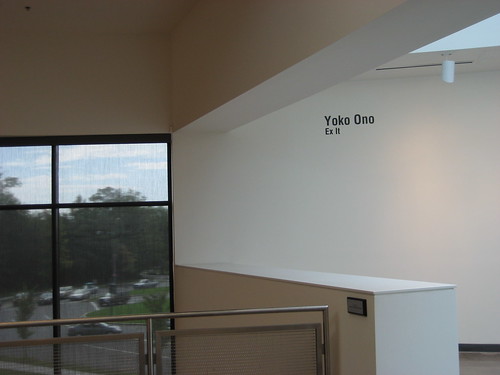 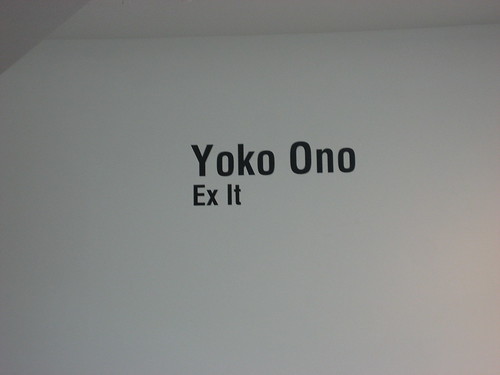 Yoko Ono
Ex It, 2008
Wood, living tress, nails, CD
Variable
Collection of the artist
I witnessed the overwhelming sight in which a number of coffins were lined up all over the space.  Those coffins, which were made out of light-brown colored plywood, were placed in equal distance from one another, with trees growing out of the holes cut in the tops of each coffin.  The room was also filled with the pleasant scent of plywood, probably because the coffins were just made.  The sound of birds chirping was constantly audible throughout the space.  And, from time to time, I could hear the sound of the leaves falling from the trees onto the cold floor. 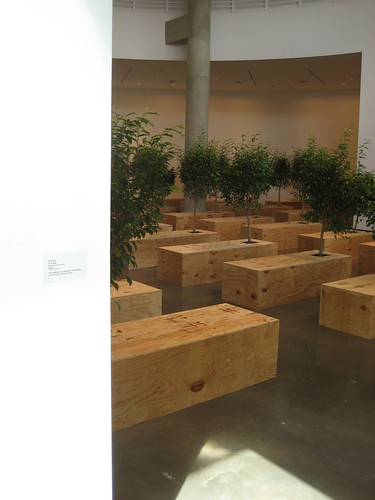 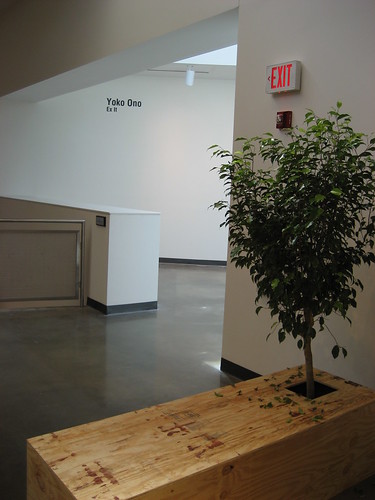 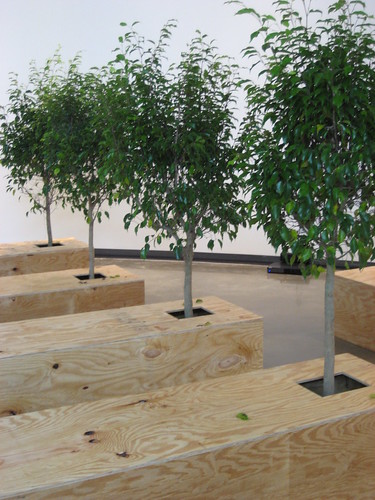 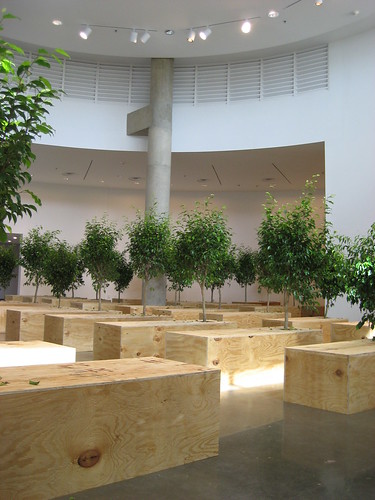 It was such a magnificent contrast of life and death – vigorous sounds of birds chirping and the growth of trees vs. silent coffins and expired leaves landing on the floor. 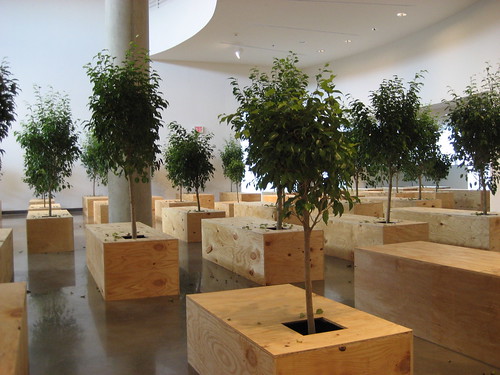 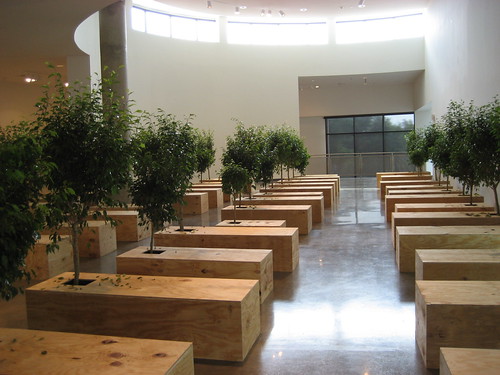 There were various sizes of coffins – large, medium, and small ones.  Usually, one hundred coffins are set up for the “Ex It” installation – sixty for men, thirty for women, and ten for children; however, probably because of the floor capacity of the museum, I counted only forty-seven coffins prepared for this show.  These coffins did not have anything on them – no names, no epitaph, no history.  This whole installation depicts the continuous cycle of birth to death to renewal – like resurrection or reincarnation. 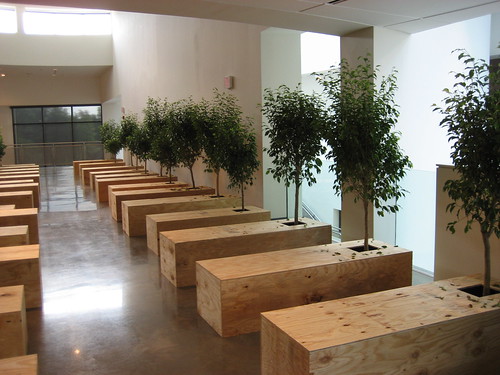 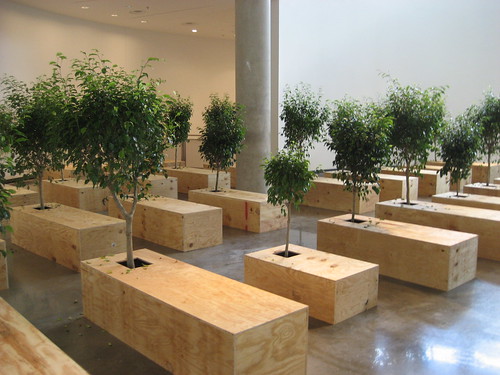 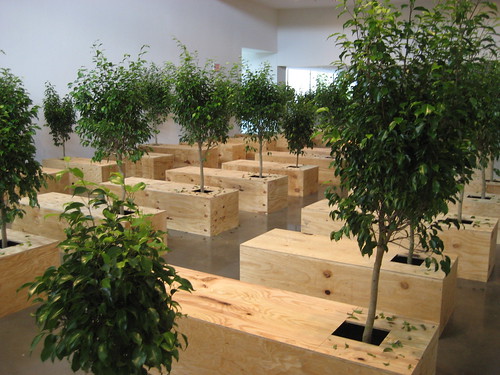 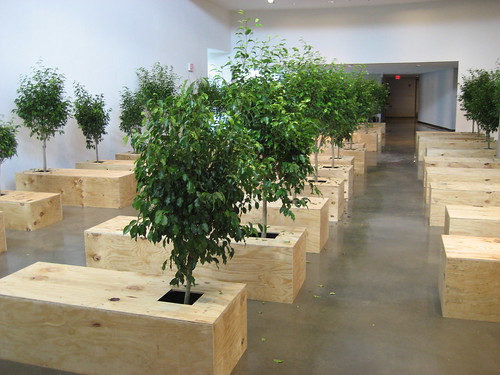 This show is being presented in Washington, D.C.  Needless to say, these coffins overlap with many caskets covered with the American flags carrying soldiers killed in Iraq and Afghanistan, on their way to Arlington National Cemetery.
Asked about the meaning of this work, “Ex It” when she was attending the conference for the “YES YOKO ONO” exhibition, held at Art Tower Mito, Mito, Ibaragi prefecture, Japan, from October ’03 to January ’04, Yoko Ono answered:
Y.O: All my works have always began from the form of a “prayer”.  For example,
I pray for progress in society, and I have always wanted every single one of my
works to be a step toward the future.
The present global tour exhibition to be held in Mito, “YES YOKO ONO”, which
was originally organized by the Japan Society, shows a history of my art works
from the very beginning.  Since it might be rather dull just to display historical
things, I decided to show Ex It, the installation of 100 coffins, in the Japan tour.
I am delighted that this one has been added to the exhibit.  There is one with a
coffin of a small child, a slightly smaller one of a woman and man’s, and the 3
coffins look as if the whole family had been killed.  There are coffins for just men
and ones for just women.  From each one of these coffins, there is a tree growing
from it with leaves, so that from a distance it looks like a forest or a wood.  That is
what a wood is.  What we see is not what we have restored.  When a tree dies it
becomes a fertilizer for the next tree to grow.  I think when you see that and that
there seems to be a balance, it somehow makes you feel that “this is all right.”
When we die, may be, we are all going to be trees.
— Page 7 from the “YES YOKO ONO” catalog,
produced by Art Tower Mito, 2003
One day when I “exit” my life, I will highly appreciate it if you – whoever you are – could put my body somewhere in a wood.  As the time goes by, my body will become a part of the ground through the process of decomposition.  And that will give nourishment for the trees to grow.  Then, the trees as they grow will produce the air and birds will make a nest on their branches.  That way, I can live on after I die.  It will be my highest honor and privilege if I could be a tree and the part of the Earth which I always regarded as my haven – like Yoko’s work, “Ex It“.
“One day let’s be a pair of trees
Nobody’ll know that the tress had
such a history“
— “DOGTOWN” by Yoko Ono
on the albums, “A Story” (’74) and “Season of Glass” (’81)
Mikihiko Hori
You can see my photos of “Ex It“ at the Katzen Arts Center of the American University Museum at the URLs below:
http://www.flickr.com/photos/[email protected]/sets/72157607360815174/
http://www.flickr.com/photos/[email protected]/sets/72157607360815174/show/
(Slide Show)
http://www.american.edu/cas/katzen/index.cfm
The Katzen Arts Center of American University
Close Encounters: Facing the Future
IMAGINE PEACE2008-10-28T14:22:17-05:00October 16th, 2008|Events & Exhibitions News|